Madison County is a county located in the U.S. state of Iowa. As of the 2010 census, the population was 15,679. The county seat is Winterset.

Madison County is famous for being the county where John Wayne was born, and for a number of covered bridges. These bridges were featured in the 1992 book, 1995 movie, and 2014 musical The Bridges of Madison County.

Madison County was formed on January 13, 1846. It has been self-governed since 1849. It was named after James Madison (1751–1836), the fourth President of the United States (between 1809 and 1817). Hiram Hurst, a suspected murderer, arsonist and hog thief was the first white settler in Madison County, having come from Missouri about April 15, 1846. 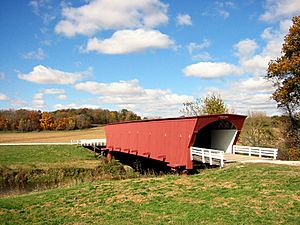 Hogback Bridge, one of the six remaining covered bridges in Madison County

There are only six extant covered bridges in Madison County:

Madison county is home to the only highway tunnel in Iowa, Harmon Tunnel, through the neck of an incised meander of the Middle River in Pammel Park.

The population ranking of the following table is based on the 2010 census of Madison County.

All content from Kiddle encyclopedia articles (including the article images and facts) can be freely used under Attribution-ShareAlike license, unless stated otherwise. Cite this article:
Madison County, Iowa Facts for Kids. Kiddle Encyclopedia.