Dallas County is a county located in the U.S. state of Iowa. As of the 2020 Census, the population was 99,678, making it the seventh-most populous county in Iowa. Between 2010 and 2020, it was the fastest growing county in Iowa and one of the fastest growing in the country. Its county seat is Adel, and its largest city is Waukee. The county was named for George M. Dallas, Vice President of the United States under James K. Polk, the namesake of neighboring Polk County.

The land that now forms Dallas County was ceded by the Sac and Fox nation to the United States in a treaty signed on October 11, 1842, and the county was formed in 1846. In 1847 the first pioneers selected a site for the county seat, which was first called Penoach and then later Adel. Once the prairie sod was "broken" by the agricultural plow, settlement was rapid in the 1850s and 1860s, with the population crossing the 12,000 mark by 1870. 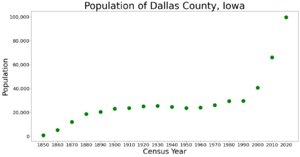 Population of Dallas County from US census data

Dallas County is divided into these townships:

The population ranking of the following table is based on the 2010 census of Dallas County.

All content from Kiddle encyclopedia articles (including the article images and facts) can be freely used under Attribution-ShareAlike license, unless stated otherwise. Cite this article:
Dallas County, Iowa Facts for Kids. Kiddle Encyclopedia.