Dexter is a city in Dallas County, Iowa, United States. The population was 640 at the time of the 2020 census. It is part of the Des Moines–West Des Moines Metropolitan Statistical Area.

The city is famous for being the site of a July 23, 1933, shootout between members of the Barrow gang and police from as far away as Des Moines. On September 18, 1948, Dexter was the site of a national plowing match at which President Harry Truman delivered a speech attacking the 80th Congress for its record in regard to the American farmer. This speech is considered one of the most important of his 1948 Whistle Stop campaign that turned the tide of the election and returned him to the White House."

According to the United States Census Bureau, the city has a total area of 2.35 square miles (6.09 km2), all of it land.

The community is immediately north of Interstate 80. 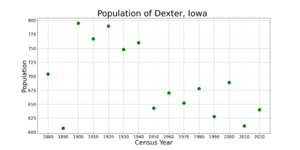 The population of Dexter, Iowa from US census data

There were 257 households, of which 31.5% had children under the age of 18 living with them, 54.9% were married couples living together, 9.7% had a female householder with no husband present, 4.7% had a male householder with no wife present, and 30.7% were non-families. 25.3% of all households were made up of individuals, and 10.1% had someone living alone who was 65 years of age or older. The average household size was 2.38 and the average family size was 2.85.

All content from Kiddle encyclopedia articles (including the article images and facts) can be freely used under Attribution-ShareAlike license, unless stated otherwise. Cite this article:
Dexter, Iowa Facts for Kids. Kiddle Encyclopedia.