Dallas Center is a city in Dallas County, Iowa, United States. The population was 1,901 during the 2020 census. It is part of the Des Moines–West Des Moines Metropolitan Statistical Area.

Dallas Center had its start in the year 1869 by the building of the railroad through that territory. It was named for Vice President George M. Dallas. 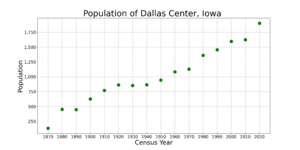 The population of Dallas Center, Iowa from US census data

There were 630 households, of which 33.3% had children under the age of 18 living with them, 56.8% were married couples living together, 8.1% had a female householder with no husband present, 4.0% had a male householder with no wife present, and 31.1% were non-families. 27.3% of all households were made up of individuals, and 12.5% had someone living alone who was 65 years of age or older. The average household size was 2.48 and the average family size was 3.03.

The city has two large parks located at each end of the city. Mound park, located on the west, includes sand volleyball courts, a gazebo, shelters, tennis court, playground equipment, and a rollerskating rink which is operational during the summer months. Memorial Park, on the east, contains playground equipment, lots of open space for flying kites, letting dogs run, a 9-hole disc golf course, and a basketball area.

During the summer, the Lena Moser Memorial Swimming Pool is open daily.

In 2009, the 33.1-mile (53.3 km) paved north loop of the Raccoon River Valley Trail (RRVT) added Dallas Center, Minburn, Perry, Dawson and Jamaica as new trailheads. The original Raccoon River Valley Trail, now known as the south loop, is a 56-mile (90 km) paved multi-use recreational trail which reaches from the Clive Greenbelt Trail to Jefferson, and passes through Clive, Urbandale, Waukee, Adel, Redfield, Linden, Panora, Yale, Herndon, and Cooper. The RRVT is nearly 90 miles (140 km) of paved trails with a paved interior loop of more than 72 miles (116 km). The shaded trailhead in Dallas Center is at 14th and Walnut and has seasonal restroom facilities, a water fountain, bicycle racks, several benches, and a picnic table.

All content from Kiddle encyclopedia articles (including the article images and facts) can be freely used under Attribution-ShareAlike license, unless stated otherwise. Cite this article:
Dallas Center, Iowa Facts for Kids. Kiddle Encyclopedia.