Grimes is a city in Dallas and Polk counties in the U.S. state of Iowa. The population was 15,392 at the time of the 2020 Census. Grimes is part of the Des Moines metropolitan area.

Grimes incorporated as a city on May 7, 1894. It is named after James W. Grimes, former senator and third governor of the state of Iowa. 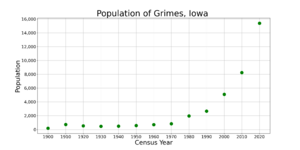 The population of Grimes, Iowa from US census data

There were 3,115 households, of which 44.1% had children under the age of 18 living with them, 58.7% were married couples living together, 9.2% had a female householder with no husband present, 3.4% had a male householder with no wife present, and 28.7% were non-families. 21.7% of all households were made up of individuals, and 4.5% had someone living alone who was 65 years of age or older. The average household size was 2.65 and the average family size was 3.15.

Portions of the community of Grimes are also served by the Johnston Community School District. Primarily, areas within the Johnston district, but within the official Grimes city limits are those areas on the east side of Iowa Highway 141 (a.k.a. S.E. Grimes Boulevard).

All content from Kiddle encyclopedia articles (including the article images and facts) can be freely used under Attribution-ShareAlike license, unless stated otherwise. Cite this article:
Grimes, Iowa Facts for Kids. Kiddle Encyclopedia.