The speed limit of ten miles (16 km) an hour had existed in Valley Junction since 1911 for all automobiles. But in 1915 an Englishman named Jack Prince built a one-mile (1.6 km) oval race track, designed to let race cars break that speed limit ten times over. The wooden track was made of 980,000 feet (300,000 m) of 2x4's laid on edge. It was one of 24 such tracks nationwide; with seating for over 10,000 people. On 1915-08-07, the eyes of the auto world were on Valley Junction in anticipation of the fastest 300-mile (480 km) auto race in history. Ralph DePalma, winner of the Indianapolis 500 that year, was one of at least a dozen drivers vying for the $10,000 purse. Before a crowd of 7,000 people, a tire blew, lunging Joe Cooper's car over the rail. Later while rounding a curb, a wheel of Billy Chandler's Duesenberg failed, cartwheeling the car into the infield and fatally injuring his mechanic, Morris Kessler. Chandler was seriously injured. Smiling Ralph Mulford won the race with DePalma a close 2nd. This baptism by blood left a bad taste in the mouth of the locals, and the track was closed two years later. The wood was salvaged and then used to construct buildings in Valley Junction.

The serious dilemma of school overcrowding was partially addressed in 1916. The bond issue to build a new high school for $50,000 was approved by a 2 to 1 vote. The similar new grade school issue was defeated soundly. Building commenced and by September of the following year, the doors of the new Valley High School were opened at 8th and Hillside. As a part of schoolboard policy, only first class college-educated teachers were hired. By 1919, the rooms of the new high school were filled. A new junior high school was proposed, approved, and completed by the fall of 1923.

The new school was the only bright spot in the otherwise uncertain dreary years of 1922 and 1923. The very foundations of the city were shaken by a 22-month-machinist strike at the Rock Island shops. Starting 1922-07-01, 600 workers were idled. The railroad company reacted by bringing replacement workers into town to break the strike. The replacements were mostly Mexican and African-American laborers brought up from Oklahoma by R. C. Hyde, the master mechanic at the shops. For their own protection they lived in boxcars and tiny houses in an area located south of Railroad Avenue and west of the main rail yards. The area was dubbed "Hyde Park" by the strikers. The resulting hardships suffered by the idled workers eventually led the most desperate to choose between breaking the strike or letting their family starve. It was a time which pitted neighbor against neighbor, tearing at the very fabric of the community. Two men shot themselves in desperation before the strike finally ended.

Although the 1920s was the era of prohibition for the rest of the country, Valley Junction had officially become a dry town in 1915. The '20s were not all doom and gloom for Valley Junction. The businessmen of the community dress in drag for a play called "The Womenless Wedding". Simple joys of small town life were reflected in the faces of the children: having a part in the school play, flying the first kite, dressing up for the May Day pageant, or riding in the Fourth of July Parade. The older kids enjoyed the chance to take the trolley to Des Moines for an afternoon of shopping and maybe lunch along the river. The notion of the mobile society was embraced by the youth. A joy ride in a fast jalopy to Greenwood Park for a game of tennis, or off to the country for a picnic mirrored the infatuation that America had for the car. The wealthier, older, and more established were not left out either. By purchasing land from the Ashworth family farm, the Des Moines Golf and Country Club left Des Moines in 1923 for a more picturesque setting along the White Pole Road auto trail at 8th Street allowing the High Society of Des Moines a relaxing and rather pleasant drive away from the hussle and bussle of the city for a day of golf in the Valley. By the close of the decade, however, the picnic was over. The Depression was especially hard for the workers of Valley Junction because the railroads had finished pulling out by 1936, and the Keystone Coal Factory had to close because of flooding in the tunnels.

By 1937, only two trains stopped daily; the sagging business climate needed a boost. Members of the commercial club believed that the only way to attract new industry would be to change the name of the city. They thought the name "Valley Junction" conveyed the image of an old-fashioned and backwards town to prospective employers and residents. The name of "West Des Moines" would give it the respectibility and prestige that the town desperately needed. There was a precedent by way of an editorial in the Valley Junction Express in 1905 that suggested dropping "Junction" from the name, but nothing came of it. The opposition feared that the change to West Des Moines would cause property owners to be taxed the same as Des Moines. It was also declared as a step toward annexation by Des Moines. A third and final election was held on December 7, 1937. 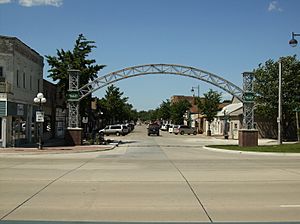 On January 1, 1938, the name "Valley Junction" was relegated to the past, and the new city of West Des Moines took the first steps to a new identity. Helping to establish this new identity, the most identifiable trait was the suspension of all property taxes between 1936 and 1938. This was due to the profits of the water department. Today the original business district of West Des Moines has been preserved as Historic Valley Junction. It features many locally owned specialty shops and restaurants as well as a weekly farmers' market.

Though the name was changed, the community's commitment to education was bolstered by funds from the Public Works Administration. Despite the Depression, a new elementary school and the Old Valley Football Stadium were built and dedicated on May 24, 1939, at 8th and Hillside. The venerable Lincoln School was razed in 1938 to make way for the new building. Longfellow was retired in 1939 and then sold in 1940 for $1000. In 1955, West Des Moines Elementary School at Walnut and 6th was renamed "Nellie Phenix Elementary" in honor of the former principal. The late 30's were very good years in the school's athletic teams, producing memorable names: True, Gavin, Swink, and Sherbo. Charles Swink was a multi-record holder in track and field. His record at the Drake Relays stood for twenty years.

An overgrown concrete eyesore on Ashworth Road soon became the musical mecca for the surrounding area on June 6, 1939, when Tom Archer opened the Val Air Ballroom. The site was originally the location of the stillborn Wilson Rubber company factory. Intended to bolster World War I tire production, the end of the war in 1918 left only a large concrete slab. Patrons of the Val Air could dance under a canopy of stars to the melodious sounds of Guy Lombardo, Benny Goodman, Glenn Miller, and other big bands. The war years brought new vitality to the community without a cost.

Then and now, flooding frequently dampens, but has not broken the residents' spirits. Unpredictable waters of the Raccoon River and Walnut Creek have often exceeded their banks due to large amounts of rain in the summer and snowmelt in the spring, filling the streets and damaging homes and businesses.

In 1950 West Des Moines had a population of 5,615, but the city began to grow as many new housing subdivisions were built in the decades ahead. West Des Moines annexed the neighboring community of Clover Hills in 1950, the town of Ashawa, a former Rock Island railroad stop, in 1957, and the town of Commerce, along the Raccoon River, in 1960. To keep up with the town's growth, city government grew as well. The venerable city hall lacked the capacity to keep up with the city's expansion, so in 1954 a new municipal building was opened. With the influx of new students, the school district's ever-expanding borders continually compromised classroom capacity. Children attended school in former homes near Phenix, with classes in hallways and living rooms. Space was even rented from the new Catholic grade school. In 1959 alone, 150–200 new homes were built, adding to the population's growth. The construction of Interstate 35, Interstate 80, and Interstate 235 in the 1960s brought more people and businesses to West Des Moines. This construction also caused the Des Moines Golf and Country Club to sell its location along Ashworth Road and 8th Street and then move to its current location in Dallas County. In 1966, Dowling Catholic High School/St. Joseph Educational Center purchased 55-acre (22 ha) from the Des Moines Golf and Country Club and, subsequently, moved from Des Moines and opened at its current location, 1400 Buffalo Road, in the fall of 1972. Several retail and office complexes opened along the I-235 corridor after the freeway's completion, including Valley West Mall, which opened in 1975. West Des Moines' population jumped from 11,964 in 1960 to 31,702 in 1990.

West Des Moines expanded into Dallas County during the 1990s and 2000s, once again placing the premier golf courses of the Des Moines Golf and Country Club in its city limits and punctuated by the opening of one of the best golf courses in Iowa at the Glen Oaks Country Club along with the West Glen Town Center and the largest in the state of Iowa, Jordan Creek Town Center and shopping mall in 2004. Major commercial construction is underway around the area, including the opening of many additional hotels, shopping centers, and office buildings, including a new Wells Fargo corporate campus. In 2007 construction started on the Village of Ponderosa, an urban-inspired and pedestrian friendly community. In 2005 West Des Moines annexed land in Warren County for the first time. Seeing the land to the south of Des Moines as extremely valuable, especially with the completion of a major "South-Belt Freeway" system, the cities of Norwalk and West Des Moines are actively competing for land in the northern part of Warren County. From 1990 to 2015, West Des Moines is currently the fastest growing city in Iowa according to land mass.

During the 1990s a new city/school campus opened near the intersection of South 35th Street and Mills Civic Parkway. West Des Moines' new police station opened in April 1992. This was followed by the opening of a new public library in 1996; the library served as temporary home for West Des Moines' city hall until a new building was dedicated in late 2002. The campus also features a new stadium for Valley High School that also opened in 2002. On the same property, the West Des Moines School district operates Valley Southwoods, a freshman high school with over 600 students that opened in 1996. Turning the West Des Moines Community Schools into a two high school district was not acceptable. In 2004, August Hillside Elementary opened on the former site of Hillside Junior High and Old Valley Stadium, which was demolished in 2001. In 2012, Clegg Park Elementary was renovated and opened as the new Walnut Creek Campus which is the district's alternative high school. Major renovation and additions were completed at Valley High in 2007 and again in 2015.

There were 24,311 households, of which 30.6% had children under the age of 18 living with them, 46.4% were married couples living together, 8.6% had a female householder with no husband present, 3.4% had a male householder with no wife present, and 41.6% were non-families. 31.2% of all households were made up of individuals, and 7.4% had someone living alone who was 65 years of age or older. The average household size was 2.32 and the average family size was 2.98.

According to West Des Moines' 2018 Comprehensive Annual Financial Report, the top employers in the city are:

All content from Kiddle encyclopedia articles (including the article images and facts) can be freely used under Attribution-ShareAlike license, unless stated otherwise. Cite this article:
West Des Moines, Iowa Facts for Kids. Kiddle Encyclopedia.