Kids Encyclopedia Facts
This page is about the city in Iowa. For other uses, see Urbandale (disambiguation).

Urbandale is a city in Polk and Dallas counties, Iowa, United States. As of the 2020 U.S. Census, the city population was 45,580. It is part of the Des Moines–West Des Moines Metropolitan Statistical Area.

Urbandale was incorporated as a city on April 16, 1917. In its early days, Urbandale served as a streetcar suburb of Des Moines with four coal mines. Urbandale served as the end of the "Urbandale Line" after plans to build a railroad from Des Moines to Woodward were abandoned because of right-of-way issues. The coal mines had closed by the end of the 1940s while streetcar service ended in 1951.

In 1920, shortly after the city incorporated, Urbandale had 298 people. Its population in 1950 was 1,777, but the city grew rapidly after that along with the rest of Des Moines' suburbs. By 1970 Urbandale had 14,434 people, and in 2000 it had 29,072. Although most of the city's developed area is in Polk County, Urbandale has expanded westward into Dallas County in recent years.

There were 15,596 households, of which 35.4% had children under the age of 18 living with them, 59.2% were married couples living together, 7.2% had a female householder with no husband present, 2.9% had a male householder with no wife present, and 30.7% were non-families. 25.0% of all households were made up of individuals, and 8.8% had someone living alone who was 65 years of age or older. The average household size was 2.52 and the average family size was 3.04. 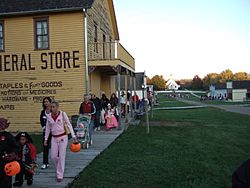 Walnut Hill, part of the Living History Farms
as seen during the 2007 Halloween event

Urbandale features 850 acres (3.4 km2) of parks and 33 miles (53 km) of recreational trails that connect to other trails in the Des Moines area.

Urbandale is the home of Living History Farms, where Pope John Paul II spoke to a crowd estimated at 350,000 on October 4, 1979 and the Buccaneer Arena, home to the Des Moines Buccaneers hockey team.

While Urbandale is primarily a residential city, other development has increased in recent years, particularly in the business parks located inside the Urban Loop. This 12-mile stretch of I-35/I-80 has multiple access points to Urbandale. Businesses in the Urban Loop have high freeway visibility and traffic counts which continue to fuel the rapid growth of this area.

The Multi-State Lottery Association (MUSL), which oversees operations for its multi-state games is located in Urbandale, although Powerball is now drawn in Florida.

In July 2005, Money magazine ranked Urbandale 53rd on its list of the "100 Best Places to Live" in the United States. The July 2006 Money Magazine list dropped the city from the list. Urbandale reappeared on the list in the July 2007 issue of Money Magazine as the 39th best place to live.

A September 2008 BusinessWeek magazine survey ranked Urbandale 12th among the nation's top 20 communities likely to face trouble ahead from the still-brewing Wall Street financial crises. This was due to the large number of mortgage and banking based facilities in the city.

According to Urbandale's 2017 Comprehensive Annual Financial Report, the top employers in the city are:

The Urban Loop is a development area in the north/central portion of Urbandale and is recognized for the easily accessible network of traffic routes; including interstate access, highway access, and local road access.

Unofficially, the name Rider Corner was used locally to define the ninety-degree bend in the 35/80 interstate system that runs through Urbandale. The proposed area was officially named in the fall of 2017 and has been used by the Urbandale City Government, developers, and real estate brokers to describe the area. Some local media outlets have not discontinued use of the name Rider Corner.

St. Pius X Catholic School of the Roman Catholic Diocese of Des Moines is in Urbandale. It opened with an initial 120 students in September 1956. Initially its facility was one story tall and had eight classrooms, but an additional eight classrooms were added after construction began on another section on May 1, 1962. That section had two stories. The area Catholic high school is Dowling Catholic High School in West Des Moines.

All content from Kiddle encyclopedia articles (including the article images and facts) can be freely used under Attribution-ShareAlike license, unless stated otherwise. Cite this article:
Urbandale, Iowa Facts for Kids. Kiddle Encyclopedia.