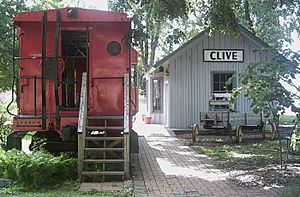 Clive was platted in 1882 but did not incorporate as a city until August 18, 1956. While the exact origin of the city's name is unknown, it is believed to have been named after Robert Clive.

In its early days, Clive was a coal mining town and a railroad shipping point along the St. Louis – Des Moines Northern Railway. The railroad depot, which dates back from 1882, has been restored while the neighboring Swanson House, dating back from 1911, serves as the headquarters for the Clive Historical Society.

After incorporation in 1956, Clive has served as a mostly residential suburb of Des Moines, and the city has grown in both land area and population since then. Most of Clive's businesses are located along 86th Street, Hickman Road (which forms most of the boundary with Urbandale), and University Avenue (which forms the boundary with West Des Moines). Clive has been part of the West Des Moines School District since 1962; the portion of Clive that is in Dallas County is part of the Waukee School District. 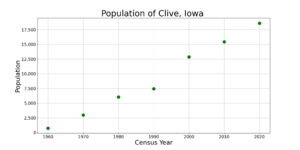 The population of Clive, Iowa from US census data

There were 5,754 households, of which 39.1% had children under the age of 18 living with them, 64.3% were married couples living together, 7.1% had a female householder with no husband present, 3.8% had a male householder with no wife present, and 24.9% were non-families. 19.0% of all households were made up of individuals, and 5.7% had someone living alone who was 65 years of age or older. The average household size was 2.68 and the average family size was 3.09.

All content from Kiddle encyclopedia articles (including the article images and facts) can be freely used under Attribution-ShareAlike license, unless stated otherwise. Cite this article:
Clive, Iowa Facts for Kids. Kiddle Encyclopedia.