Adel ( AY-dəl) is a city in, and the county seat of, Dallas County, Iowa. It is located along the North Raccoon River. Its population was 6,153 at the time of the 2020 Census.

Adel is the oldest town within Dallas County. Originally called Penoach, Adel was incorporated in 1847, and changed to its current name in 1849. In 1855, there were about twenty-five houses in Adel and three stores. From that time onward, the city began to grow at a faster rate.

Situated along the river, Adel had a good supply of water-power for a flour mill. It was to be situated on a section of property owned by Noeingerl Cantrel & Co. J. H. Strong of Des Moines, and H. H. Moffatt built the mill in 1856–57 at a cost of $20,000. The dam was constructed with about eight feet of head water. The mill was kept in good repair, able to average from twelve to fifteen bushels per hour, with a capability of thirty per hour, but was destroyed in 1913.

Railroad reached other towns in Dallas County before Adel, and the town was threatened with losing the county seat. Adel business owners backed the Des Moines Western Railroad Company, which was soon renamed as the Des Moines, Adel, and Western. A narrow gauge railroad was built in the 1870s. The line was rebuilt as standard gauge after the Milwaukee Road purchased the line in the 1890s. Passenger service to Adel was discontinued in 1952, and the line was abandoned in 1987. The line has been repurposed into the popular Raccoon River Valley Trail. 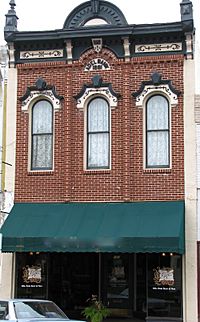 The Adel bank was robbed on March 6, 1895. Two men entered in a buggy and shot a teller, who, though wounded, managed to close the vault and turn the tumblers, preventing the thieves from taking off with a substantial amount. Future Governor of Iowa, George W. Clarke, had a law office on the second floor. As Clarke descended the stairs, a robber fired his gun. However, the weapon misfired, sparing Clarke's life.

The Dallas County Courthouse, was completed in 1902 at a cost of about $109,000, dominates downtown Adel.

“In that era it was a competition almost between the counties to erect an edifice that would be of importance and of character to their becoming of age.” Mark A. Hanson, Dallas County Supervisor 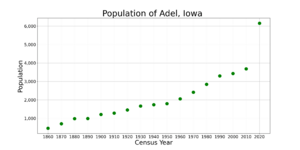 The population of Adel, Iowa from US census data 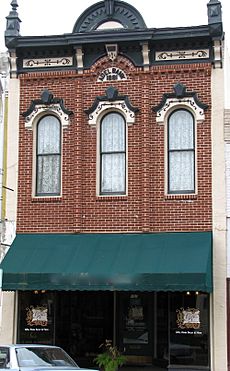 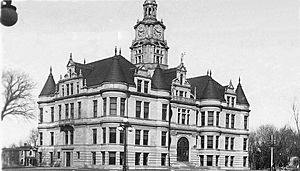 Stine Seed, the world's largest private seed company, is based in Adel. It has 15,000 acres of Iowa farmland and is almost entirely owned by Harry Stine and his four children.

All content from Kiddle encyclopedia articles (including the article images and facts) can be freely used under Attribution-ShareAlike license, unless stated otherwise. Cite this article:
Adel, Iowa Facts for Kids. Kiddle Encyclopedia.