Wells Fargo Arena is a multi-purpose arena in Des Moines, Iowa, United States. Part of the Iowa Events Center, the arena opened on July 12, 2005, at a cost of $117 million. Named for title sponsor Wells Fargo, the arena replaced the aging Veterans Memorial Auditorium as the Des Moines area's primary venue for sporting events and concerts.

Wells Fargo Arena seats 15,181 people for hockey and arena football games, 16,110 for basketball games, and as many as 16,980 for concerts. It also features The Fort Restaurant, which provides views of the Des Moines River and the Iowa State Capitol. The restaurant opened on October 6, 2005, coinciding with the Iowa Stars' inaugural home game.

The arena is also connected to the rest of the Iowa Events Center as well as downtown Des Moines through the city's Skywalk system.

The first event held at the arena was Tony Hawk's Boom-Boom Huck Jam, on July 1. Its first concert, featuring Tom Petty and the Heartbreakers with The Black Crowes, was held on July 18.

Wells Fargo Arena is home to the Iowa Wolves (formerly named the Iowa Energy) of the NBA G League, the Iowa Barnstormers of the Indoor Football League and the Iowa Wild of the American Hockey League.

From 2005 until 2009, Wells Fargo Arena served as the home of the American Hockey League's Iowa Chops. The arena is notable for hosting the inaugural game of the reincarnation of the Arena Football League on April 2, 2010, between the Barnstormers and Chicago Rush, televised nationally by NFL Network. 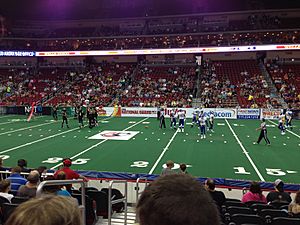 The Iowa Barnstormers playing against the Tampa Bay Storm during the 2013 season.

It was the host for the first and second Round games for the 2008 NCAA Women's Division I Basketball Tournament and served as a regional site 2012 tournament. In 2013, it hosted the NCAA Wrestling Team Championship.

It has hosted the state high school wrestling and basketball tournaments since 2006 and the Big Four Classic, a doubleheader featuring the state's four men's Division I teams, since 2012.

The arena hosted the 2011 NBA D-League Finals, which saw the Iowa Energy win their first title on their home court and set the D-League attendance record with 14,036 fans in the arena for Game 2.

In 2016, the arena hosted first and second-round games for the Men's NCAA Basketball Tournament after having failed on several prior bids. The NCAA Men's basketball tournament returned to Wells Fargo Arena in 2019, hosting the tournament's first and second round from March 21 to 23. The tournament is slated to return again in 2023.

In 2020, the arena gained a temporary second hockey tenant when the Des Moines Buccaneers announced plans to begin their season downtown after damage to their home arena during the August 2020 Midwest derecho. The Buccaneers returned to their previous arena in January 2021.

All content from Kiddle encyclopedia articles (including the article images and facts) can be freely used under Attribution-ShareAlike license, unless stated otherwise. Cite this article:
Wells Fargo Arena (Des Moines, Iowa) Facts for Kids. Kiddle Encyclopedia.