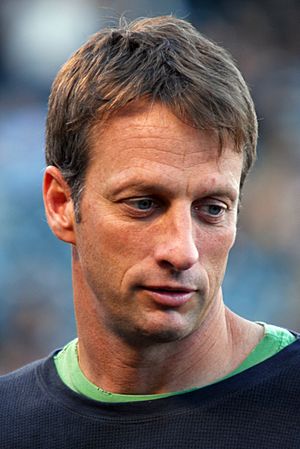 Anthony Frank Hawk (born May 12, 1968) is an American retired professional skateboarder and actor. He is credited with being the first recorded skater to land the 900, which consists of two-and-a-half rotations (900°) in the air before landing back on the pipe during the televised June 27, 1999 X Games, for which he received an enormous amount of attention. He is also known for his Tony Hawk's video game series.

All content from Kiddle encyclopedia articles (including the article images and facts) can be freely used under Attribution-ShareAlike license, unless stated otherwise. Cite this article:
Tony Hawk Facts for Kids. Kiddle Encyclopedia.