Alleman is a city in Polk County, Iowa, United States. The population was 423 at the 2020 census. It is part of the Des Moines–West Des Moines Metropolitan Statistical Area. 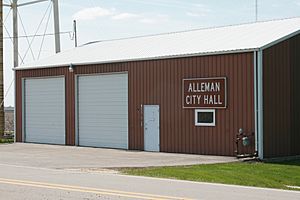 Alleman was named for early settler John L. Alleman. It did not incorporate as a city until May 18, 1973, making it the most recent city to incorporate in Polk County.

According to the United States Census Bureau, the city has a total area of 2.70 square miles (6.99 km2), all of it land. 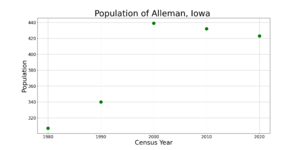 The population of Alleman, Iowa from US census data

There were 151 households, of which 37.7% had children under the age of 18 living with them, 74.2% were married couples living together, 8.6% had a female householder with no husband present, 3.3% had a male householder with no wife present, and 13.9% were non-families. 11.3% of all households were made up of individuals, and 2.7% had someone living alone who was 65 years of age or older. The average household size was 2.86 and the average family size was 3.09. 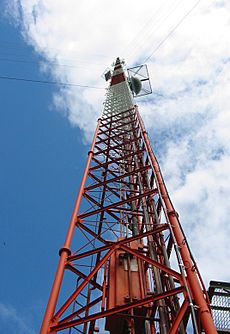 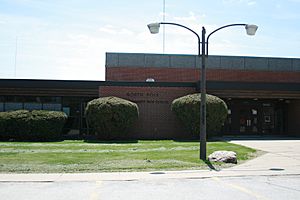 Because of its central location and relatively high altitude for central Iowa, two Doppler weather radar stations are located in Alleman: WHO-TV 13's First Alert Mega Doppler, and KCCI-TV 8's Super Doppler 8. A storm in July 2011 resulted in the radome from the Mega Doppler being torn from the structure and landing in a nearby yard.

Because Alleman is located about midway between Des Moines and Ames, many radio and television stations transmit from towers located in the town. These towers include some of the world's tallest structures, reaching over 600 metres (2,000 ft). Along with the towers, a large portion of the Alleman low-altitude airspace is obstructed by the many guy-wires supporting the structures, making the area extremely hazardous for small, low-altitude aircraft. The specific antennas are:

All content from Kiddle encyclopedia articles (including the article images and facts) can be freely used under Attribution-ShareAlike license, unless stated otherwise. Cite this article:
Alleman, Iowa Facts for Kids. Kiddle Encyclopedia.