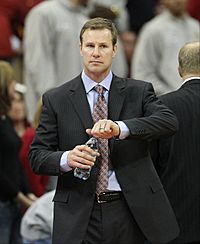 Fredrick Kristian Hoiberg (born October 15, 1972) is an American professional basketball coach and former player. He serves as the head coach for the Chicago Bulls of the National Basketball Association (NBA) since 2015. In his playing career, he played for the Bulls, the Indiana Pacers and the Minnesota Timberwolves. He was born in Lincoln, Nebraska.

All content from Kiddle encyclopedia articles (including the article images and facts) can be freely used under Attribution-ShareAlike license, unless stated otherwise. Cite this article:
Fred Hoiberg Facts for Kids. Kiddle Encyclopedia.