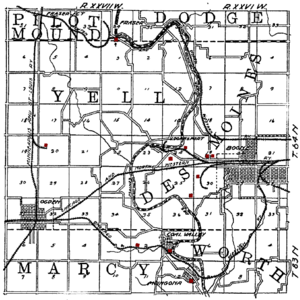 Map of the Boone area from 1908, showing the railroads and coal mines (shown in red) of the region.

Coal mining played an important part in the early history of the Boone area. Local blacksmiths were already mining coal from the banks of Honey Creek south of what became Boone in 1849.

Boone was platted as a town in 1865 by John Insley Blair. It was incorporated the following year, when the Chicago and North Western Transportation Company railroad station was built there. The town was originally named "Montana"; it was renamed to Boone in 1871. The nearby town of Boonesboro was also chartered in 1866; Boonseboro was annexed to Boone in 1887.

Commercial mining was spurred by the arrival of the railroad. In 1867, Canfield and Taylor opened a mine just west of town. Their mine shaft was 242 feet deep, and they hauled coal to the railroad by wagon. In 1874, a railroad spur was built to the mine. This mine was taken over by the railroad, and operated for 30 years. There were coal seams in the Boone area; the upper vein, about 3 feet thick, was always worked using longwall mining, while the lower vein was always mined using room and pillar mining. In 1912, United Mine Workers Local 869 in Boone had 554 members, close to 10% of the population at the time.

The first Casey's General Store was also founded in Boone, Iowa in 1968.

The "Twister Hill" scene where Bill Harding and Jo Harding try and drop Dorothy amid a tornado in the Warner Bros. 1996 film Twister was filmed here.

Ledges State Park is located four miles south of Boone and is a popular destination. 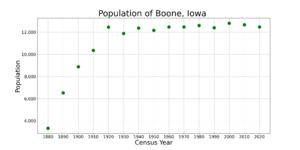 The population of Boone, Iowa from US census data

There were 5,380 households, of which 29.4% had children under the age of 18 living with them, 47.3% were married couples living together, 9.7% had a female householder with no husband present, 3.9% had a male householder with no wife present, and 39.1% were non-families. 32.1% of all households were made up of individuals, and 12.5% had someone living alone who was 65 years of age or older. The average household size was 2.32 and the average family size was 2.92.

Boone is located on US Highway 30. The original Lincoln Highway ran through the center of town, but a new 4-lane highway was built in the late 1960s that bypassed the center of Boone to the south. There is also a network of paved country roads radiating out in all directions.

Boone is served by the mainline of the Union Pacific Railroad which purchased the Chicago & Northwestern Railroad (C&NW) in 1995. Boone was a division and crew change point on the railroad under the Chicago & Northwestern and some of that business remains today. There is a moderate-sized rail yard to the east of the downtown area. The locomotives no longer sound their horns in the town proper due to modifications to the various points where streets intersect with the rail line.

Boone was also the exact midpoint on the Fort Dodge, Des Moines & Southern Railroad, an electric interurban line converted to diesel in 1955 after a flood on the Des Moines River devastated the Fraser hydroelectric power plant that supplied power to the railroad. It connected with the C&NW downtown. It was purchased by the C&NW in 1968 and subsequently abandoned. The western part of the line to Fraser has been resurrected as the Boone and Scenic Valley Railroad, a tourist line.

The Chicago, Milwaukee, St. Paul and Pacific Railroad also ran a branch line into Boone from the southeast. It likewise connected with the C&NW. The line was trimmed back to Luther in the late 1960s and completely abandoned a few years later.

Pufferbilly Days, an annual event celebrating Boone's railroad heritage, is held the week after Labor Day and is one of Iowa’s top five community festivals with over 30,000 attendees.

Boone is also the site of the annual Farm Progress Show. Back in the days when the show rotated from one farm to another in Iowa, Illinois and Indiana before the permanent sites were established at Boone, Iowa and Decatur, Illinois. The show now alternates between these two permanent sites on an annual basis.

Vincenzo Miserendino's final and largest statue of Theodore Roosevelt, which was eight times life-size was commissioned in 1941, and was scheduled to arrive in Boone, Iowa, in 1943. However, before casting, its 4,000 pounds of bronze was appropriated for WWII. Miserendino commented that Theodore Roosevelt himself would have approved of that decision to put the service of the country first. Later, in 1946, the Roman Bronze Corporation of Corona, New York City, produced the casting in Miserendino's original mold. On January 6, 1948, it was placed in McHose Park. Residing on three large granite blocks, the 6' 3" statue depicts Roosevelt rising out of a mountainous landscape with his hand outstretched as if addressing a crowd. Below the statue are ten bas reliefs of Roosevelt’s outdoor accomplishments. 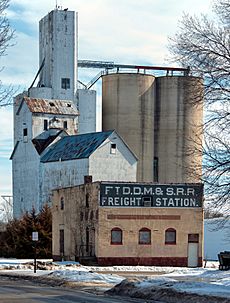 The Sacred Heart parish operates a parochial school for kindergarten through 8th grade. 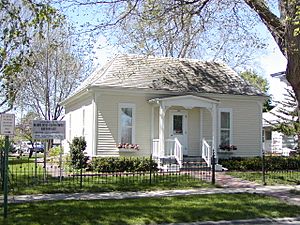 All content from Kiddle encyclopedia articles (including the article images and facts) can be freely used under Attribution-ShareAlike license, unless stated otherwise. Cite this article:
Boone, Iowa Facts for Kids. Kiddle Encyclopedia.