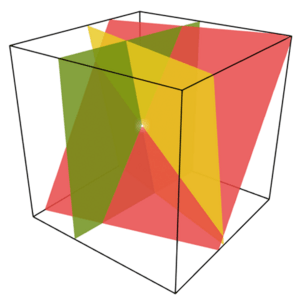 A linear system in three variables determines a collection of planes (one plane for each equation). The intersection point is the solution.

is a system of three equations in the three variables

. A "solution" to a linear system is an assignment of numbers to the variables such that all the equations are simultaneously satisfied. A solution to the system above is given by

since it makes all three equations valid:

In mathematics, the theory of linear systems is a branch of linear algebra, a subject which is fundamental to modern mathematics. Computer algorithms for finding the solutions are an important part of numerical linear algebra, and such methods play a prominent role in engineering, physics, chemistry, computer science, and economics. A system of non-linear equations can often be approximated by a linear system (see linearization), a helpful technique when making a mathematical model, computer model, or computer simulation of a relatively complex system. For complex systems, there are many equations and many variables, not just two or three. In many cases, the number of equations and variables in the system are the same. In some cases, there are more variables than equations, and the solution will be a range of different values rather than one exact solution.

One method for solving such a system is as follows. First, solve the top equation for

Now substitute this expression for x into the bottom equation:

This results in a single equation involving only the variable

, and substituting this back into the equation for

This method generalizes to systems with additional variables.

Very often, all the coefficients are written in the form of a matrix A, which is called a coefficient matrix.

In much the same way, the variables can be written in the form of a vector:

This makes it possible to write

Mathematically, the vector defined above is a 1-by-n matrix. The system of equations can then be solved using the multiplication operation defined on matrices. A, x and b are all part of the same algebraic field.

Solving a system of linear equations

There a three cases when looking for solutions to a system of linear equations:

There are two categories of methods for solving a system of linear equations. Iterative methods use many steps to get a solution, direct methods only need one step:

Examples for iterative methods are:

Using computers to solve systems of linear equations is used every day. For example, it is used in weather forecasting models. Hot dog factories use it to make small changes in the receipe as food ingredient prices change. College cafeterias use it to figure out how much food to cook based on past experience when the cafeteria gives students the choice between multiple entrees.

All content from Kiddle encyclopedia articles (including the article images and facts) can be freely used under Attribution-ShareAlike license, unless stated otherwise. Cite this article:
System of linear equations Facts for Kids. Kiddle Encyclopedia.