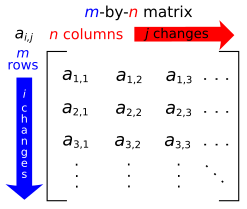 Specific entries of a matrix are often referenced by using pairs of subscripts, for the numbers at each of the rows & columns.

In mathematics, a matrix (plural: matrices) is a rectangle of numbers, arranged in rows and columns. The rows are each left-to-right (horizontal) lines, and the columns go top-to-bottom (vertical). The top-left cell is at row 1, column 1 (see diagram at right).

Matrices are often represented by capital roman letters such as

, and there are rules for adding, subtracting and "multiplying" matrices together, but the rules are different than for numbers. As an example, the product

does not always give the same result as

, which is the case for the multiplication of ordinary numbers. A matrix can have more than 2 dimensions, such as a 3D matrix. Also, a matrix can be one-dimensional, as a single row or a single column.

Many natural sciences use matrices quite a lot. In many universities, courses about matrices (usually called linear algebra) are taught very early, sometimes even in the first year of studies. Matrices are also very common in computer science, engineering, physics, economics, and statistics.

The horizontal lines in a matrix are called rows and the vertical lines are called columns. A matrix with m rows and n columns is called an m-by-n matrix (or m×n matrix) and m and n are called its dimensions.

The places in the matrix where the numbers are is called entries. The entry of a matrix A that lies in the row number i and column number j is called the i,j entry of A. This is written as A[i,j] or ai,j.

The two matrices have the same dimensions. Here,

is true (and is true in general for matrices of equal dimensions).

The multiplication of two matrices is a bit more complicated:

There are some matrices that are special.

A square matrix has the same number of rows as columns, so m=n.

An example of a square matrix is

Every square dimension set of a matrix has a special counterpart called the "identity matrix", represented by the symbol

. The identity matrix has nothing but zeroes except on the main diagonal, where there are all ones. For example:

An inverse matrix is a matrix that, when multiplied by another matrix, equals the identity matrix. For example:

is the inverse of

The formula for the inverse of a 2x2 matrix,

A matrix, that has many rows, but only one column, is called a column vector.

The determinant takes a square matrix and calculates a simple number, a scalar. To understand what this number means, take each column of the matrix and draw it as a vector. The parallelogram drawn by those vectors has an area, which is the determinant. For all 2x2 matrices, the formula is very simple:

For 3x3 matrices the formula is more complicated:

There are no simple formulas for the determinants of larger matrices, and many computer programmers study how to get computers to quickly find large determinants.

There are three rules that all determinants follow. These are:

All content from Kiddle encyclopedia articles (including the article images and facts) can be freely used under Attribution-ShareAlike license, unless stated otherwise. Cite this article:
Matrix (mathematics) Facts for Kids. Kiddle Encyclopedia.