Eigenvalues and eigenvectors facts for kids 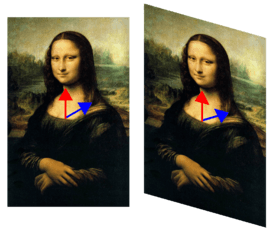 Linear algebra talks about types of functions called transformations. In that context, an eigenvector is a vector—different from the null vector—which does not change direction after the transformation (except if the transformation turns the vector to the opposite direction). The vector may change its length, or become zero ("null"). The eigenvalue is the value of the vector's change in length, and is typically denoted by the symbol

If there exists a square matrix called A, a scalar λ, and a non-zero vector v, then λ is the eigenvalue and v is the eigenvector if the following equation is satisfied:

These ideas often are extended to more general situations, where scalars are elements of any field, vectors are elements of any vector space, and linear transformations may or may not be represented by matrix multiplication. For example, instead of real numbers, scalars may be complex numbers; instead of arrows, vectors may be functions or frequencies; instead of matrix multiplication, linear transformations may be operators such as the derivative from calculus. These are only a few of countless examples where eigenvectors and eigenvalues are important.

In cases like these, the idea of direction loses its ordinary meaning, and has a more abstract definition instead. But even in this case, if that abstract direction is unchanged by a given linear transformation, the prefix "eigen" is used, as in eigenfunction, eigenmode, eigenface, eigenstate, and eigenfrequency.

Eigenvalues and eigenvectors have many applications in both pure and applied mathematics. They are used in matrix factorization, quantum mechanics, facial recognition systems, and many other areas.

For the matrix A

is an eigenvector with eigenvalue 1. Indeed, one can verify that:

On the other hand the vector

is not an eigenvector, since

and this vector is not a multiple of the original vector x.

All content from Kiddle encyclopedia articles (including the article images and facts) can be freely used under Attribution-ShareAlike license, unless stated otherwise. Cite this article:
Eigenvalues and eigenvectors Facts for Kids. Kiddle Encyclopedia.