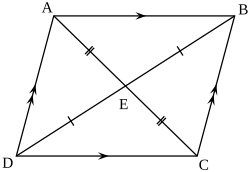 As shown in the picture on the right, because triangles ABE and CDE are congruent (have the same shape and size),

In all Parallelogram's opposite angles are equal to each other. Angles which are not opposite in the Parallelogram will add up to 180 degrees.

A simple (non self-intersecting) quadrilateral is a parallelogram if and only if any one of the following statements is true:

All content from Kiddle encyclopedia articles (including the article images and facts) can be freely used under Attribution-ShareAlike license, unless stated otherwise. Cite this article:
Parallelogram Facts for Kids. Kiddle Encyclopedia.