Canastota is a village located inside the Town of Lenox in Madison County, New York, United States. The population was 4,084 at the 2010 census.

The village of Canastota is in the south part of the Town of Lenox. Canastota High School is located in the village.

Kniste Stota was the historic name of the village, a term used by the local Oneida Nation of the Iroquois Confederacy, meaning "cluster of pines near still waters". The village recently celebrated the bicentennial of its settlement by European-Americans.

One early historic property is the Judge Nathan S. Roberts House, which dates to about 1820. 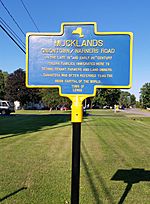 Canastota is well known as an "onion growing" town that at one point was a large portion of income in the village.

The village was incorporated in 1835, but was reorganized in 1870. Located along the banks of the Erie Canal, which was completed through the Mohawk River valley by 1825, Canastota was a vibrant trading and commerce town during the mid-nineteenth century for a wide agricultural area. When the canal was superseded by construction of railroads, and later the New York Thruway, some canal towns were cut off from the main lines of commerce.

Canastota is home of the International Boxing Hall of Fame. Having produced two world champions in Carmen Basilio and Billy Backus, Canastota was a natural choice as a site for the museum and outdoor stage. The museum is located a short distance from the New York State Thruway.

Each second weekend in June, Canastota has hosted numerous past and current champions, including Muhammad Ali, George Foreman and Joe Frazier. A Sunday parade and an induction ceremony is held to honor past and current Hall of Fame inductees.

The following sites and historic districts are listed on the National Register of Historic Places.

According to the United States Census Bureau, the village has a total area of 3.3 square miles (8.5 km2), all of it land.

There were 1,872 households out of which 29.6% had children under the age of 18 living with them, 45.9% were married couples living together, 11.9% had a female householder with no husband present, and 37.3% were non-families. 32.2% of all households were made up of individuals and 17.6% had someone living alone who was 65 years of age or older. The average household size was 2.36 and the average family size was 2.96.

All content from Kiddle encyclopedia articles (including the article images and facts) can be freely used under Attribution-ShareAlike license, unless stated otherwise. Cite this article:
Canastota, New York Facts for Kids. Kiddle Encyclopedia.