Rome is a city in New York State. It is located in Oneida County, which is in north-central or Upstate New York. The population was 33,725 at the 2010 census. Rome is one of two principal cities in the Utica–Rome Metropolitan Statistical Area, which lies in the "Leatherstocking Country" made famous by James Fenimore Cooper's Leatherstocking Tales, set in frontier days before the American Revolutionary War. Rome is in New York's 22nd congressional district.

The city developed at an ancient portage site of Native Americans, including the historic Iroquois. It continued to be strategically important to Europeans who also used the main 18th and 19th-century waterways, based on the Mohawk and Hudson rivers, that connected New York City and the Atlantic seaboard to the Great Lakes. The original European settlements developed around fortifications erected in the 1750s to defend the waterway, in particular the British Fort Stanwix (1763).

Following the war, the city began to develop with the construction of the Rome Canal in 1796, to connect Wood Creek (leading from Lake Ontario) and the Mohawk River. In the same year the Town of Rome was formally created as a section of Oneida County. For a time, the small community next to the canal was informally known as Lynchville, after the original owner of the property. The Town of Rome was converted into a city by the New York State Legislature on February 23, 1870. The residents have called Rome the City of American History.

Rome was founded along an ancient Native American portage path known as the Oneida Carrying Place, Deo-Wain-Sta, or The Great Carrying Place to the Six Nations (Iroquois) or Haudenosaunee people in their language. These names refer to a portage road or path between the Mohawk River to the east, which leads to the Hudson River; and Wood Creek to the west, which leads to Lake Ontario. Now located within the modern Rome city limits, this short portage path was the only overland section of a water trade route stretching more than 1,000 miles between Lake Ontario and the lower Hudson. Travelers and traders coming up the Mohawk River from the Hudson had to transfer their cargo and boats and transport them overland between 1.7 and six miles (depending on the season) to continue west on Wood Creek to Lake Ontario. This ancient trade route joined the Great Lakes and Canada via the Mohawk River to the Hudson River and the Atlantic Ocean.

During the French and Indian War, the North American front of the Seven Years' War, this region had much fighting. The British colonists had erected several small forts to guard the Oneida Carrying Place and the lucrative fur trade against French incursions from Canada. But, a combined French regular army, Canadian and allied Native American force overwhelmed and massacred a British force here in the Battle of Fort Bull. Later in 1758, after several abortive attempts to fortify the area, the British sent a very large force to secure the Oneida Carry and build a stronger rampart complex, which they named Fort Stanwix.

Following defeat by the English during the war, the French ceded their territory in North America east of the Mississippi River to England. The English signed the Treaty of Fort Stanwix (1768) with the Iroquois, by which they promised to preserve areas west of the Appalachian Mountains as an Indian reserve and prohibit colonial settlement. It has been described as "one of the worst treaties in the History of Anglo-Indian relationships". The treaty has also been described as "the last desperate effort of the British to create order west of the Appalachians. The British abandoned the fort after that war; it deteriorated and was eventually torn down, its parts used by settlers. 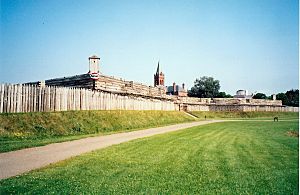 At the outbreak of the Revolutionary War, American Continental forces took control of the Fort Stanwix site, rebuilding and improving the fort. The installation survived a siege by the British in the Saratoga Campaign of 1777, becoming renowned as "the fort that never surrendered". Patriot militia, regulars, and their Oneida Nation allies under the command of Col. Peter Gansevoort, successfully repelled a prolonged siege in August 1777 by British, German, Loyalist, and Canadian troops and warriors from several Native American nations, all commanded by British Gen. Barry St. Leger. The failed siege, combined with the battle at nearby Oriskany as well as the battles of Bennington, and Saratoga, thwarted a coordinated British effort to take the northern colonies. Following this success, the Americans were able to gain alliances with France and the Netherlands, now more confident that the rebels had a chance to win.

After the repulse of the British at Fort Stanwix, bloody fighting erupted along the American northern frontier and throughout the Mohawk Valley. There were terrible losses for both American settlers and the people of the Six Nations, as retaliatory raids were made against each side. Because many of the Oneida were fighting with the rebels and against the four nations allied with the British, especially the Mohawk and Seneca, the Iroquois had members attacking each other, which they had avoided doing earlier in this century.

The Americans used Fort Stanwix as the primary staging point for attacks against British loyalist units and their Haudenosaunee allies. The Sullivan Expedition of 1779 was launched from here as a ruthless scorched earth campaign against villages of Iroqouis nations allied with the British. Commander George Washington ordered the campaign in retaliation for the fierce frontier attacks in New York, such as the Cherry Valley Massacre by Loyalist irregulars led by Mohawk Chief Joseph Brant and John Butler. The Sullivan campaign destroyed nearly 50 Iroquois villages and their food stores, leading to starvation of many of the nations during the following winter. Many Iroquois went to Canada for refuge but struggled with starvation there, too.

The American forces abandoned the fort in 1781. After the war, as the area became settled, pioneers took materials to use in constructing their own homes and barns. They built the Rome Canal along Wood Creek, to connect it to the Mohawk River and enable continuous passage by water from Lake Ontario via the Mohawk and Hudson rivers to New York City. After completion of the Erie Canal in 1825, development of Rome increased. The city became an industrial and trade center in the western Mohawk Valley. The fort site was reduced to a mound of dirt, with bushes and grasses growing over it.

Congress passed the Fort Stanwix Act of 1935 to establish the fort as a National Monument because of the site's historic importance. The site was administered by the National Park Service. In 1973, the reconstruction of Fort Stanwix began, based on historical evidence related to 18th-century construction and occupation, and it was completed in 1976. The fort is operated by the National Park Service as a museum. On July 2, 2005, the Marinus Willet Center opened on the grounds of the monument. It provides audio-visual programs to orient visitors, as well as secure storage space for the museum's collection of artifacts and related historic materials.

The critical east/west American trade route through the frontier was improved by construction of the Erie Canal. On July 4, 1817 construction on the Erie Canal began in Rome. The Erie Canal reaches a summit in Rome, reaching 420 feet. The first phase was completed in 1825, connecting the Hudson River by waterway to the Great Lakes. It resulted in an increase in trade and traffic between communities around the Great Lakes and New York City, stimulating development along the route.

Jesse Williams founded the first cheese factory in the United States at Rome in 1851. Williams also developed the process used today for large-scale cheese manufacturing. There were numerous dairy farms in the area and throughout the Mohawk Valley.

The City of Rome was incorporated in 1870.

For four decades between 1951 and 1991, the Rome Air Development Center (RADC) was located at Griffiss AFB. In 1991, the RADC was redesignated Rome Laboratory. It has remained active as the Griffiss AFB was closed as part of the Base Realignment and Closure process in 1993. In 1997, Rome Laboratory was made part of the Air Force Research Laboratory and renamed the Rome Research Site. The RADC has been responsible for some of the United States Air Force's major technological accomplishments, especially in the area of radio communications.

The nationally recognized rock festival, Woodstock 1999, was held in Rome. The city staged it at the former Griffiss Air Force Base site. The 3-day festival was held the weekend of July 23–25, and drew a crowd of about 200,000 people. Cable network MTV covered the concert extensively, and live coverage of the entire weekend was available on pay-per-view. The festival featured acts including Metallica, Kid Rock, DMX, Red Hot Chili Peppers, and Wyclef Jean; early reviews for many of the acts were positive; critics particularly praised performances by George Clinton, Jamiroquai, James Brown, Sheryl Crow, and Rage Against the Machine. A full list of appearances can be found at Woodstock 1999. Woodstock '99 is also known for bonfires being lit in the crowd, brawls with police, and looting.

In July 2005, New York City developers, Park Drive Estates, purchased the Woodhaven Housing, formerly the base housing for Griffiss Air Force officers and enlisted military members, with the goal of re-developing the property as a resort-style active adult community. Redevelopment stalled and the property was ceded to the City of Rome in 2015. Demolition of unsafe structures is expected to commence in 2017.

Rome averages over 120 inches (3,000 mm) of snowfall each winter, mostly due to its proximity to Lake Ontario and the lake-effect snow that it produces.

The city had its peak of population in 1960, with declines caused by restructuring of industry and loss of jobs. Later in the 20th century, the closure of the Air Force base also drew away jobs and residents. The city has worked to develop a new economy. Elements of the base have been redeveloped for new uses, while high-quality research continues. 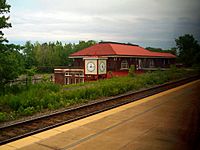 Rome's primary road connection is the Utica-Rome Expressway, a freeway section of New York State Route 49. The expressway runs 14 miles from Rome to Utica, where it meets I-90, I-790, NY 5, NY 12, and NY 8 in a massive cloverleaf interchange.

Griffiss Air Force Base closed in 1995 and was converted into Griffiss International Airport. It has general aviation as well as military use. No scheduled commercial service uses the airport.

All content from Kiddle encyclopedia articles (including the article images and facts) can be freely used under Attribution-ShareAlike license, unless stated otherwise. Cite this article:
Rome, New York Facts for Kids. Kiddle Encyclopedia.