James Fenimore Cooper (September 15, 1789 - September 14, 1851) was an American writer. He created the character of Natty Bumpo, the archetypal American frontiersman.

Cooper was born on September 15, 1789 in Burlington, New Jersey. His father was a United States Congressman. James Fenimore was one year old when his family moved to Cooperstown, New York. The community was started by his father, at the age of 13 when he began attending Yale University.

Cooper got a job as a seaman on a merchant ship. He joined the United States Navy at age 18. He became a midshipman, but left the Navy in 1811.

Cooper married Susan DeLancey when he was 21. They had seven children. The first-born Susan Fenimore Cooper, became a writer and naturalist. 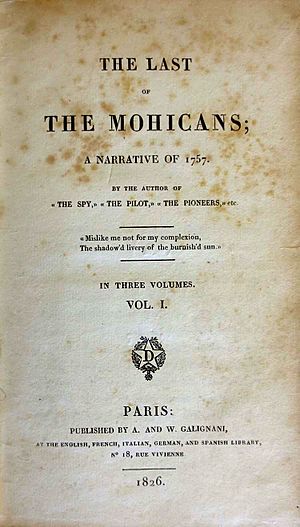 Precaution was Cooper's first book. It was published anonymously in 1820. In 1823, he published The Pioneers. This book was the first of the Leatherstocking novels. These stories became famous for the fictional character of an American woodsman called Natty Bumppo. Cooper's most famous novel Last of the Mohicans was published in 1826. It became one of the most widely read American novels of the 19th century.

In 1826, Cooper moved his family to Europe. He wanted to make more money as an author. He also wanted to give his children a better education. He continued to write. His books published in Paris include The Red Rover and The Water Witch. These were novels about the sea. He returned to the United States in 1833.

Cooper moved back to his ancestral home Otsego Hall in Cooperstown. He returned to writing fiction books with The Pathfinder and The Deerslayer. These books continued the story of Natty Bumppo. Cooper spent his last years in Cooperstown. He died on September 14, 1851.

All content from Kiddle encyclopedia articles (including the article images and facts) can be freely used under Attribution-ShareAlike license, unless stated otherwise. Cite this article:
James Fenimore Cooper Facts for Kids. Kiddle Encyclopedia.