The Last of the Mohicans facts for kids

The Last of the Mohicans is an adventure story with an historical setting and several historical characters. It was written by James Fenimore Cooper. It was published in 1826. It is set during the French and Indian War in what is now upstate New York State.

The book's style is difficult, but the book is one of the most popular stories in the English language. It is often studied in American literature courses. It has been loosely adapted to movies, a movie serial, a television series, and made-for-television movies.

The Last of the Mohicans is one of five books in a series informally known as The Leatherstocking Tales. These five books follow the life and career of a fictional American frontiersman named Natty Bumpo. Mohicans is the third in the chronological order of the story.

Cooper's sources and influences include British and American books in the Romantic literary tradition such as the Waverly books by Sir Walter Scott, travel books, and American folklore about the frontier and frontiersmen.

The story is set in New York State in 1757 during the French and Indian War. It tells of the adventures and dangers Natty Bumpo and his two Indian friends, Uncas and Chingachgook, face as they lead Cora and Alice Munro through the wilderness between Albany and Lake George to their father at Fort William Henry. The siege of the British fort by French and Indian forces, its fall, and the subsequent Massacre at Fort William Henry are historical events against which the action takes place. 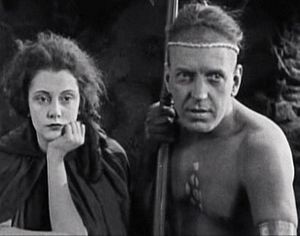 Barbara Bedford and Alan Roscoe in the 1920 silent movie adaptation

A television series loosely based on the characters of Bumpo and Chingachgook stars John Hart and Lon Chaney, Jr. It aired for a few seasons, beginning in 1957. A television mini-series and several made-for-television movies have also aired.

All content from Kiddle encyclopedia articles (including the article images and facts) can be freely used under Attribution-ShareAlike license, unless stated otherwise. Cite this article:
The Last of the Mohicans Facts for Kids. Kiddle Encyclopedia.