Plainfield is a village in Will County, Illinois, United States. The US Census Bureau estimates the population at 41,734 as of 2013.

The village has established a community Preservation Commission and historic preservation ordinance. It is the home of the Lake Renwick Preserve, a county forest preserve used for birdwatching and other activities.

The area was called Walkers' Grove until it was platted as Plainfield in 1841. It was originally settled by a large community of Potawatomi, and the land was later bequeathed to the United States as part of the Treaty of St. Louis (1816) with the Council of the Three Fires. Indian Boundary Road aligns with the western border of the tract of land originally ceded.

In 1828, James Walker, in the company of several men, erected a sawmill around which the settlement of Walkers' Grove developed.

Plainfield is identified as the oldest community in Will County because the earliest settlement of Walkers' Grove was established on the banks of the DuPage River by 1828. However, the actual Village of Plainfield was platted immediately north of Walkers' Grove in 1834 by Chester Ingersoll. The separate community of East Plainfield was platted in June 1836 by James Mathers who began selling lots in July 1836. In addition he also constructed a gristmill and a mill race west of Water Street. Water Street would later become Plainfield-Naperville Road. Ingersoll's Planefield (Plainfield)which comprised lots in Section 16, along with Mather's East Plainfield lots in Section 10 and Levi Arnold's plat of Section 9 all became joined to create the present-day village after the death of Levi Arnolds in 1845.

Walkers' Grove flourished because of the DuPage River and established routes to Fort Dearborn in Chicago, as well as to Ottawa. Reuben Flagg hauled lumber from Walker's mill to Chicago in order to erect the first two frame structures in the city (P.F.W. Peck House and the George Dole Forwarding House). Chicago also depended upon the settlement for mail and supplies. 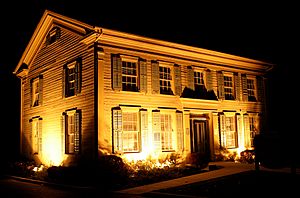 The Flanders House in Plainfield, Illinois.

The community's early prosperity was stunted when the Illinois & Michigan Canal opened in 1848, because the Village was not located along the canal. Located within the Village are numerous Greek Revival, upright-and-wing cottages, a school built in 1847, and a number of early-19th-century homes. Plainfield currently has three buildings listed on the National Register of Historic Places: Plainfield House, Flanders House and a 1928 Standard Oil Gas Station.

North Central College was first founded in the village in 1861 as Plainfield College.

Plainfield is also the birthplace of Eddie Gardner, one of the pilots credited with establishing the transcontinental air mail routes for the United States Postal Service. The earliest architects associated with buildings in Plainfield are J.E. Minott of Aurora; G. Julian & John Barnes of Joliet; and Herbert Cowell of Joliet and Plainfield.

On August 28, 1990, the Plainfield Tornado, an F5 tornado, went through the Village and parts of Crest Hill and Joliet, killing 29 people and injuring hundreds. A population explosion started to take form at the end of the 20th century after the tornado. This made way for a large number of new home subdivisions. Before the population boom, Plainfield was primarily an agricultural town.

Certain older parts of Plainfield have suffered from extreme traffic congestion. Before Interstate 55 was built just east of the town in the late 1950s, U.S. Route 30, The Lincoln Highway and U.S. Route 66 (sometimes referred to as "The Mother Road") merged into one street for three blocks on what is now Illinois Route 59. This merge is now only shared by U.S. 30 and Lincoln Highway, between Plainfield/Joliet Road on the south to Lockport Street on the north, but continues to be an area of heavy traffic congestion even outside heavy commuting periods. At one time, the two longest paved highways in the world (Lincoln Highway and U.S. Route 66) crossed within Plainfield. The highways only crossed each other twice and both locations are in Will County. The other location is in neighboring Joliet.

Like its namesake, Plainfield's topography is generally flat. Thousands of years ago, land in greater Plainfield used to be part of the bed of proglacial Lake Wauponsee. However, the lake did not hold up long, and eventually drained into the Illinois River valley. The lake left behind a very flat landscape. Much of downtown Plainfield has an above sea level elevation of around 600–625 feet (183–191 m), with some areas in the western and northwestern portions of the village's outskirts exceeding 700 feet (210 m). This rise in elevation was created by terminal moraines that were formed during the Wisconsin Episode of the last ice age's last glacial period that has been recorded.

There were 4,315 households out of which 47.3% had children under the age of 18 living with them, 73.6% were married couples living together, 5.7% had a female householder with no husband present, and 18.4% were non-families. 14.8% of all households were made up of individuals and 4.2% had someone living alone who was 65 years of age or older. The average household size was 3.01 and the average family size was 3.37.

Major highways in Plainfield include:

The Pace bus system expanded two routes (755 and 855) to Plainfield beginning May 6, 2013. Both routes are "bi-directional, weekday rush hour service" from the Plainfield Village Center to Downtown Chicago. One route terminates in the Illinois Medical District and the other in Chicago's East Loop.

All content from Kiddle encyclopedia articles (including the article images and facts) can be freely used under Attribution-ShareAlike license, unless stated otherwise. Cite this article:
Plainfield, Illinois Facts for Kids. Kiddle Encyclopedia.