Romeoville is a village in Will County, Illinois, United States. The village is located 26 mi (42 km) southwest of Chicago on the Des Plaines River. The population was 39,746 based on US Census Bureau 2019 projections. It is located in the southwest suburban area of Chicago near Interstate 55 and Interstate 355.

According to the United States Census Bureau, Romeoville is a community of 39,793 people. There are 11,777 households in Romeoville with 8,974 of them being families. The median household income is $71,344.

Romeoville is home to over 600 businesses. In 2013, the village won a Gold Medal from the International Economic Development Council and Atlas Integrated in the High Performance Economic Development category. They earned the award by creating 1,560 jobs during 2012/2013, which was the most for a town with a population between 25,001 to 100,000.

Other major employers include Kehe Foods, FedEx Ground, and the Village of Romeoville. 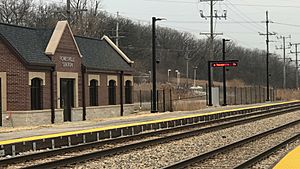 Major highways in Romeoville include:

All content from Kiddle encyclopedia articles (including the article images and facts) can be freely used under Attribution-ShareAlike license, unless stated otherwise. Cite this article:
Romeoville, Illinois Facts for Kids. Kiddle Encyclopedia.