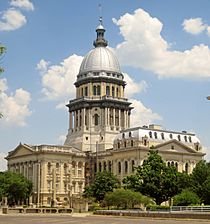 The Illinois State Capitol, located in Springfield, Illinois, it houses the legislative and the executive branches of the government of the U.S. state of Illinois.

The current building is the sixth to serve as the capitol since Illinois became a state in 1818. It was built in the architectural styles of the French Renaissance and Italianate. The total cost of the construction was $4,500,000.

Its tall central dome, and tower roofs, are covered in zinc to provide a silvery facade which does not weather.

All content from Kiddle encyclopedia articles (including the article images and facts) can be freely used under Attribution-ShareAlike license, unless stated otherwise. Cite this article:
Illinois State Capitol Facts for Kids. Kiddle Encyclopedia.