Sandwich is a city in DeKalb, Kendall, and LaSalle counties in the U.S. state of Illinois. The population was 7,421 at the 2010 census.

The town is inexorably tied to politician "Long John" Wentworth and his efforts to move the State of Illinois border with Wisconsin from being even with the bottom of Lake Michigan to its present location. If those efforts had not been successful, the State Line would actually reside along the LaSalle-DeKalb County border, splitting parts of Sandwich from the main areas of the incorporated community. The community was established when Almon Gage sought a railroad stop on the Chicago, Burlington and Quincy Railroad that ran through town. Originally naming it Newark Station, (not to be confused with the nearby village of Newark), he and Wentworth worked extensively to create the community and also to get the railroad stop created. In honor of his efforts, Wentworth was given the opportunity to name the town. He named it after his home of Sandwich, New Hampshire. The city's Wentworth Apartments and Wentworth Street are named after Mr. Wentworth.

Sandwich is the home of the Sandwich Fair, which first started as an annual livestock show in DeKalb County. Held yearly, the Wednesday-Sunday after Labor Day since 1888, it is one of the oldest continuing county fairs in the state of Illinois, drawing daily crowds of more than 100,000, with the top attendance days reaching more than 200,000 fair-goers.

Within the city limit of Sandwich, there are a network of creeks, which either connect to Somonauk Creek (Lake Holiday), Little Rock Creek, or to the Fox River. Lake Davis, which stretched from Veterans Memorial Park to what is now Gletty Road, was drained early in the 19th Century to open up additional farmland. The Sandwich town site was built on a natural gradation due to a geological fault line known as the Sandwich Fault, so the city stands on a hillside. The southeast corner of the city is the lowest spot, roughly near the Harvey Creek Preserve, as well as near Little Rock Creek. The last earthquake along the Sandwich Fault was on February 10, 2010, with a previous tremor being reported in January 2007.

In the immediate area of Sandwich, there are numerous communities which straddle county borders. Sandwich and Somonauk are split by the LaSalle-DeKalb County Line, while the unincorporated community of Welland is split along the border of LaSalle and Lee counties further West; and Millington, Stavanger, and Seneca are also split along the county lines South of Sandwich. 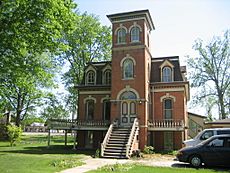 All content from Kiddle encyclopedia articles (including the article images and facts) can be freely used under Attribution-ShareAlike license, unless stated otherwise. Cite this article:
Sandwich, Illinois Facts for Kids. Kiddle Encyclopedia.