Sandwich is a town in Carroll County, New Hampshire, United States. Its population was 1,466 at the 2020 census. Sandwich includes the villages of Center Sandwich and North Sandwich. Part of the White Mountain National Forest is in the north, and part of Squam Lake is in the southwestern corner of the town. As such, Sandwich lies on the boundary between New Hampshire's Lakes Region and White Mountains Region. The Sandwich Range of the White Mountains lies partially within the town, as does the namesake Sandwich Mountain. The town is home to the Sandwich Fair, a popular agricultural fair that occurs every October.

Chartered in 1763 by Colonial Governor Benning Wentworth, the land was considered so inaccessible that the grant was enlarged, making Sandwich one of the largest towns in the state. It was named in honor of John Montagu, 4th Earl of Sandwich, said to be the inventor of the sandwich.

The earliest European settlers arrived in 1767. By 1830 Sandwich had grown to a population of 2700, roughly double the current (2010) population. At that time the town contained farms, stores, mills, churches, schools, carpenters, blacksmiths, and wheelwrights.

By the end of the 1800s much of the population had left Sandwich to live in cities to the west. Sandwich began to be an attraction for visitors, summer residents and artists, which continues to this day.

The League of New Hampshire Craftsmen began in Sandwich as "Sandwich Home Industries" in 1920, and continues statewide today. Each fall the town hosts the Sandwich Fair. The Durgin Bridge, built in 1864, is a covered bridge in the eastern section of town. 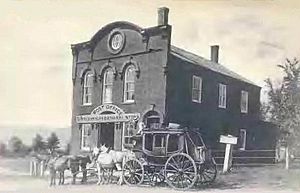 According to the United States Census Bureau, the town has a total area of 93.5 square miles (242 km2), of which 90.2 square miles (234 km2) is land and 3.2 square miles (8.3 km2) is water, comprising 3.47% of the town. Sandwich is drained to the east by the Bearcamp and Cold rivers, to the northwest by the Beebe River, to the southwest by Squam Lake, and to the south by the Red Hill River. Mount Israel, elevation 2,630 feet (802 m) above sea level, is at the center. Part of the Squam Mountains is in the west. Part of the Sandwich Range is in the north, including the 3,993-foot (1,217 m) Sandwich Mountain (also known as Sandwich Dome), the highest point in town.

The primary settlement in the town is Center Sandwich. Other villages include Sandwich, North Sandwich, and Whiteface.

Many scenes from the iconic opening credits of the TV series Newhart were filmed in the Sandwich and Squam Lake area. The footage used for the series was leftover stock recorded for the film On Golden Pond which was also filmed in the area. 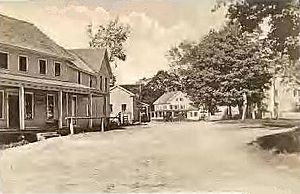 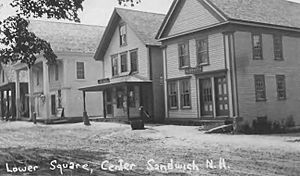 All content from Kiddle encyclopedia articles (including the article images and facts) can be freely used under Attribution-ShareAlike license, unless stated otherwise. Cite this article:
Sandwich, New Hampshire Facts for Kids. Kiddle Encyclopedia.