Kids Encyclopedia Facts
This page is about the fair in New Hampshire. For the fair in Illinois, see Sandwich, Illinois. 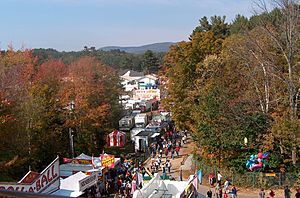 The Sandwich Fair is an annual event held on Columbus Day weekend in Sandwich, New Hampshire. The midway is open the three days of the fair and the Friday night prior to the fair's start. Two parades are part of the fair: an antique auto parade on Saturday and then the "Grand Street Parade" on Sunday, including marching bands from Inter-Lakes High School and Moultonborough Academy.

The fair was a three-day event for the first time in 1988 and is now held annually on Columbus Day Weekend. The fair is held on the fairgrounds near the Samuel Wentworth Library and the tennis courts and the field after the fire station. The Fair is managed by the Sandwich Fair Association, which owns the fairgrounds. The Gillette Shows company of Pittsfield, Massachusetts manages the midway attractions.

Friday night has been the midway preview for several years. A bracelet can be purchased and the rides can be ridden as many times as they like from 4 pm until 9 pm, admission is free. Exhibit halls are closed on Friday night.

Saturday has been "kids" day with a ride special bracelet. Purchase a bracelet and ride all the rides from 9 am - 2 pm as much as they want. Exhibit halls open at 9 am and the animal shows start on Saturday also for everyone to see.

Sunday has always featured the "Grand Street Parade" and is still a major feature of the day along with all of the open animal shows. Horse and oxen pulling have always been very well attended. An original Abbot-Downing Company Concord coach leads the annual parade.

Monday is "Senior" day. The rides are still going and this is the day to see all of the "4-H" animal shows. Seniors at least 65 get a discount admission price that day.

All content from Kiddle encyclopedia articles (including the article images and facts) can be freely used under Attribution-ShareAlike license, unless stated otherwise. Cite this article:
Sandwich Fair Facts for Kids. Kiddle Encyclopedia.