Tamworth is a town in Carroll County, New Hampshire, United States. The population was 2,812 at the 2020 census. Tamworth includes the villages of Chocorua, South Tamworth, Wonalancet, and Whittier. The White Mountain National Forest is to the north. The town is home to Hemenway State Forest in the north and White Lake State Park in the southeast. 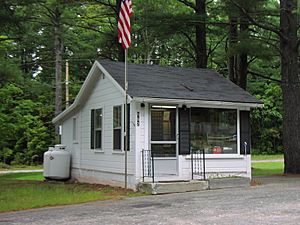 Granted in 1766 by Colonial Governor Benning Wentworth, this town was named in honor of his close friend, British Admiral Washington Shirley, Viscount Tamworth. The admiral's daughter, Selina Shirley, was instrumental in the founding of Dartmouth College. The village of Whittier, like Mount Whittier in Ossipee, is named for the poet John Greenleaf Whittier.

The Chinook Kennels here raised sled dogs for the Rear Admiral Richard E. Byrd Antarctic expeditions and the Army's search-and-rescue units. The Barnstormers Theatre summer playhouse was established here in 1931 by Francis Grover Cleveland, son of President Grover Cleveland. He supported the theatre until his death in 1995. Barnstormers is hailed as the oldest continuously running professional theatre in the state.

In 1921, at the turn of the 20th century many people travelled to the White Mountains of New Hampshire seeking haven from the noise of the cities and the business of urban life. Thinkers, artists and writers such as William and Henry James, E.E. Cummings, friends and descendants of Julia Ward Howe and many others vacationed in the Tamworth area.

Great ideas were being formulated that hatched great societal changes. Out of this environment, Elizabeth Lane Whittemore started the Tamworth Community Nurse Association (TCNA), dedicated to sustaining the health and vitality of Tamworth and its residents providing skilled nursing care and coordination of available services all with no fee for service. 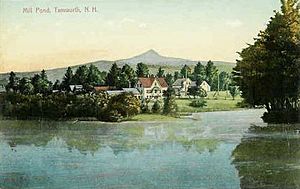 Mill Pond c. 1910, with Mount Chocorua in the distance.

According to the United States Census Bureau, the town has a total area of 60.7 square miles (157 km2), of which 59.7 square miles (155 km2) is land and 1.0 square mile (2.6 km2) is water, comprising 1.59% of the town. Tamworth is drained by the Bearcamp, Chocorua and Wonalancet rivers. Chocorua Lake is to the north. The highest point in Tamworth is the summit of Black Snout Mountain at 2,689 feet (820 m) above sea level, located precisely at the southwest corner of the town, within the Ossipee Mountain range. 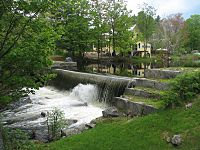 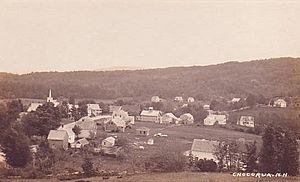 As of December 2012, the Concord Coach bus stop in West Ossipee is available. This route connects the region with destinations as far south as Boston and as far north as Berlin, New Hampshire.

The 1942 epic Look to the Mountain, by LeGrand Cannon, Jr., takes place in Tamworth as 19-year-old Whit Livingston and his new wife, 16-year-old Melissa Butler, become the first white pioneer family to settle the area.

All content from Kiddle encyclopedia articles (including the article images and facts) can be freely used under Attribution-ShareAlike license, unless stated otherwise. Cite this article:
Tamworth, New Hampshire Facts for Kids. Kiddle Encyclopedia.