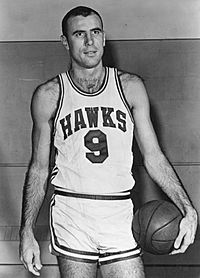 Robert E. Lee Pettit Jr. (born December 12, 1932) is an American former professional basketball player. He played as a power forward. He played 11 seasons in the National Basketball Association (NBA) for the Milwaukee/St. Louis Hawks between 1954 and 1965. He was an NBA champion in 1958 and an 11-time NBA All-Star. He was awarded the first NBA Most Valuable Player Award in 1956, winning it again in 1959. In 1970, Pettit was added to the Naismith Memorial Basketball Hall of Fame.

Pettit was born in Baton Rouge, Louisiana. He was married to his wife Carole until her death in 2010. The couple had three children.

All content from Kiddle encyclopedia articles (including the article images and facts) can be freely used under Attribution-ShareAlike license, unless stated otherwise. Cite this article:
Bob Pettit Facts for Kids. Kiddle Encyclopedia.