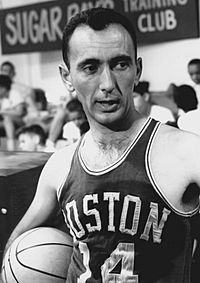 Robert Joseph Cousy (born August 9, 1928) is an American former professional basketball player. He played as a point guard. He played in the National Basketball Association (NBA) for the Boston Celtics between 1950 and 1963. He also played for the Cincinnati Royals in the 1969–70 season. He was a six-time NBA champion and a 13-time NBA All-Star. He was also awarded the NBA Most Valuable Player Award in 1957. In 1971, Cousy was added to the Naismith Memorial Basketball Hall of Fame.

Cousy was born in Manhattan, New York. He was married to his wife Missie Ritterbusch until her death in 2013. The couple had two daughters.

All content from Kiddle encyclopedia articles (including the article images and facts) can be freely used under Attribution-ShareAlike license, unless stated otherwise. Cite this article:
Bob Cousy Facts for Kids. Kiddle Encyclopedia.