The Tualatin River is a tributary of the Willamette River located in Oregon in the United States. The river is approximately 83 miles (134 km) long, and it drains a fertile farming region called the Tualatin Valley southwest and west of Portland at the northwest corner of the Willamette Valley. There are approximately 500,000 people residing on 15 percent of the land in the river's watershed.

The Tualatin River arises near Windy Point on the eastern side of the Northern Oregon Coast Range. It begins in the Tillamook State Forest in Washington County and flows about 83 miles (134 km) to the Willamette River near West Linn in Clackamas County. Along the way, it falls from about 2,000 feet (610 m) above sea level to about 60 feet (18 m), most of that occurring in its first 15 miles (24 km). From the unincorporated community of Cherry Grove, 68 miles (109 km) from the mouth, the river falls only about 220 feet (67 m) in meanders that trend generally east across the relatively flat Tualatin Valley.

Passing under Minter Bridge Road about 41 miles (66 km) from the mouth, and then Rood Bridge Road, the river wanders by the Meriwether National Golf Course which is on its right and The Reserve Vineyards & Golf Club, which is to the left, and receives Rock Creek, Gordon Creek, and Butternut Creek, all from the left. Flowing south from the vicinity of the golf course, the river runs roughly parallel to River Road, which is on its left. It passes under Harris Bridge, which carries Oregon Route 10 and Oregon Route 208 (Southwest Farmington Road) at the unincorporated community of Farmington. Further downstream, it receives Christensen and Burris creeks from the right and continues south until turning east again at about RM 30 (RK 48). Shortly thereafter, it flows by the unincorporated community of Scholls, where it receives McFee Creek from the right before passing under Scholls Bridge and Oregon Route 210. Entering the Tualatin River National Wildlife Refuge at about RM 25 (RK 40).

Leaving the wildlife refuge about 4 miles (6 km) later, the rivers meanders around the unincorporated community of Bull Mountain, which is on its left (north), passes under Roy Rogers Road, receives Chicken Creek and Rock Creek from the right, then passes under Oregon Route 99W (Southwest Pacific Highway) at King City. The river continues by Avalon Park, which is on its left, flows through Cook Park in Tigard, which is on its left, and forms the north boundary of the Tualatin Country Club, which is on the right. Immediately thereafter, the river receives Fanno Creek from the left just after passing under a Portland & Western Railroad bridge and a pedestrian bridge between Tigard and Durham on the left (north) and Tualatin on the right. Durham City Park is on the left bank, and Tualatin Park is on the right. The stream passes under another Portland & Western Railroad bridge, then under Southwest Boones Ferry Road and then under Interstate 5, the latter at about RM 8 (RK 13), and enters Clackamas County.

Shortly thereafter, the river passes Browns Ferry Park, which is on the river's right, and then Canal Acres Park, on the left. At the east end of the park, Saum Creek enters from the right, and the Oswego Canal, which carries water from the Tualatin River to Oswego Lake in Lake Oswego, is on the left. Beyond the canal entrance, the river passes River Run Park, which is on the left. Soon Athey Creek enters from the right and Pecan Creek from the left before the river passes under Southwest Stafford Road near the unincorporated area of Wankers Corner and flows past the unincorporated community of Shadowood. In its final 5 miles (8 km), the river receives Wilson Creek from the right, passes under Interstate 205 and then under Southwest Borland Road, and receives Fields Creek from the left. It flows by Swift Shore Park, which is on the left, under Southwest Pete's Mountain Road, by Willamette Park, also on the left, and enters the Willamette River at West Linn, about 28 miles (45 km) from the larger river's confluence with the Columbia River. 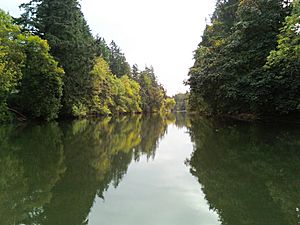 The Tualatin River was named by the local Native American band, the Atafalati, that lived in the Tualatin Valley. The name translated as sluggish or lazy. Early settlers called it the "Quality River".

The valley of the Tualatin was an important early farming region in the settlement of Oregon. The building of a plank road to the Tualatin Valley from Portland in 1856 is considered by historians to be one of the main reasons for Portland's rise as the dominant city in the region. The valley contains many natural wetlands, some of which have been designated the Tualatin River National Wildlife Refuge, and others are protected at Jackson Bottom Wetlands Preserve.

All content from Kiddle encyclopedia articles (including the article images and facts) can be freely used under Attribution-ShareAlike license, unless stated otherwise. Cite this article:
Tualatin River Facts for Kids. Kiddle Encyclopedia.