Located in the Tualatin Valley, Oregon routes 8, and 47 pass through Forest Grove with 47 and 8 signed as the Tualatin Valley Highway south and east of the main part of the city, respectively, Oregon Route 8 signed as Gales Creek Road west of the city, and Oregon Route 47 signed as the Nehalem Highway north of the city. Pacific University has been the most distinctive aspect of the town throughout its history. Old College Hall on campus is listed on the National Register of Historic Places along with nine other structures in the city. 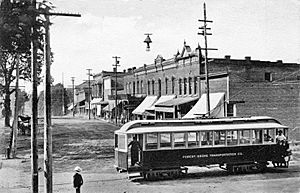 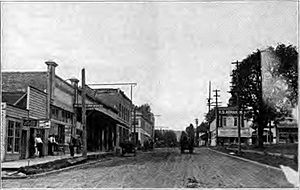 Prior to the 1840s when Euro-Americans settled the area, the Atfalati band of the Kalapuya Native American tribe lived on the Tualatin Plains in what is now Forest Grove. In 1841, Alvin T. and Abigail Smith were among the earliest to use the Oregon Trail and settled on what was first known as West Tualatin Plain. They overwintered with Henry Harmon Spalding, arriving in what is now Forest Grove in the fall. Intending to be missionaries, they found little potential as most of the natives had succumbed to European diseases. Smith served as the community's first postmaster beginning on February 1, 1850, and his log cabin served as the post office.

According to Oregon Geographic Names, the name Forest Grove was selected on January 10, 1851, at a meeting of the trustees of Tualatin Academy (later known as Pacific University). Resident and school trustee J. Quinn Thornton suggested the name, which he also had used for the name of his homestead. The name referred to a grove of oak trees that still stand on what is now the campus of the university. Previous post offices in the area were called Tuality Plains and Tualatin, with Forest Grove adopted on December 31, 1858. The city was platted in 1850.

In November 1908, the Oregon Electric Railway (OE) began serving the city, and in January 1914, competitor Southern Pacific (SP) followed suit, opening its own line, separate from OE's. Both railroads provided freight and passenger service, SP's passenger service being known as the Red Electric. A company called the Forest Grove Transportation Company operated local streetcar service, but this lasted only from 1906–11. The Red Electric passenger service to Forest Grove ended in 1929 and Oregon Electric's ceased in 1932.

There are 12 properties individually listed on the National Register of Historic Places and two historic districts: the 18-block Clark Historic District with homes dating as far back as 1854 (and several dozen pre-1900) and the Painter’s Woods Historic District. These include the Alvin T. Smith House, First Church of Christ, Scientist, and Old College Hall.

Forest Grove is located on the western edge of the Portland metropolitan area and the Willamette Valley.

One of the largest giant sequoia trees of the state of Oregon can be found in Forest Grove.

This region experiences warm (but not hot) and dry summers, with no average monthly temperatures above 71.6 °F (22.0 °C). According to the Köppen Climate Classification system, Forest Grove has a warm-summer Mediterranean climate, abbreviated "Csb" on climate maps. 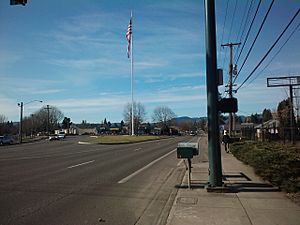 Forest Grove has one sister city, located in Japan: 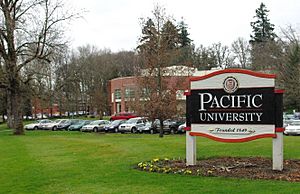 The principal landmark of Forest Grove is Pacific University, a private school of higher education. Its significant buildings include Old College Hall and Marsh Hall.

Forest Grove, as well as Cornelius, Gales Creek, and Dilley, are all part of the Forest Grove School District.

All content from Kiddle encyclopedia articles (including the article images and facts) can be freely used under Attribution-ShareAlike license, unless stated otherwise. Cite this article:
Forest Grove, Oregon Facts for Kids. Kiddle Encyclopedia.