Gaston is a city in Washington County, Oregon, United States. Located between Forest Grove to the north and Yamhill to the south, the city straddles Oregon Route 47 and borders the Tualatin River. Named after railroad executive Joseph Gaston, its population was 637 as of the 2010 census. 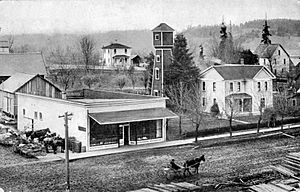 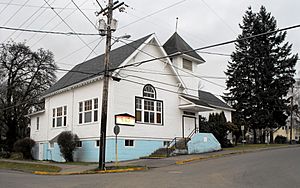 Prior to the arrival of European immigrants in the 1800s, little is known about Native American settlements in the Gaston area. What is known indicates that Native Americans in the area lived similarly to other Pacific Northwest tribes. In nearby Cherry Grove there are a few petroglyphs usually credited to the Atfalati tribe, which is a division of Kalapuya. Diseases such as smallpox, malaria and influenza which were brought to North America by European Settlers, decimated local native American population. By the time Europeans began to significantly settle the region, as much as 90% of the original native populations had been killed.

In the 1860s, the census recorded only about 70 people in the Gaston area. Nonetheless, in 1866, the first Gaston School was founded. In 1870, a new school was built near the connecting road between Old Highway 47 and the new Highway 47. Initially students only attended school for three to six months per year, later expanded to nine months. In 1871, as a stage coach line brought more settlers, and in anticipation of a new rail line, railroad developer and town namesake Joseph Gaston set aside 2 acres (0.81 ha) of land on what was then the edge of town for a school.

In the early 1870s, stagecoach and rail service was expanding rapidly in Washington County. By 1872, a stop on the Portland – St. Joseph line in Patton Valley was officially named Gaston. With a train stop, more people came and by 1873 a post office opened in the new town. The same year, the first church, Gaston Congregational Church, was also built. In the 1880s, Joseph Gaston was responsible for draining Wapato Lake, which lay in the valley around the rail stop, creating the farmland that exists today. "Wapato" is a word from the local Indians that refers to a water-based starchy root vegetable related to arrowroot sometimes called a "water potato" in local English. Rail service ended in 1985 with the removal of rails back to the junction to the Seghers spur.

The addition of a spur line to the nearby Cherry Grove area for the construction of a lumber mill in 1911 added significant activity to the local economy, although it had to be shut down in 1913 during a lumber market crash.

In early May 1935 workers at the Stimson Mill went on strike. On May 22, "twenty-five cars loaded with pickets left the Labor Temple in Portland" to support the strikers. The next morning Governor Charles Martin ordered the state police and National Guard to protect the strikebreakers. Armed with gas grenades and machine guns, the military and police forces demanded the strikers leave or be shot. The strikers chose to disperse, averting a potential bloodbath.

The growing popularity of Portland and the Pacific Northwest in general has led to population growth throughout the region. Though too far from Portland to benefit much at first, recently Gaston has started to see new housing and an uptick in school registrations. The late 1980s brought a new fire station and the 1990s baseball/softball-oriented park. Just after 2000, a new post office was built on the edge of town. Thus far, the town has not been able to effectively capitalize on the local wine industry's growing national and international recognition. In 2006, the mayoral candidate advocated obtaining state or federal funding to revitalize the commercial strip on Main Street which, in theory, could help the city capture some of the wine tourism dollars.

According to the United States Census Bureau, the city has a total area of 0.28 square miles (0.73 km2), all land.

This region experiences warm (but not hot) and dry summers, with no average monthly temperatures above 71.6 °F (22.0 °C). According to the Köppen Climate Classification system, Gaston has a warm-summer Mediterranean climate, abbreviated "Csb" on climate maps.

There were 241 households, of which 36.9% had children under the age of 18 living with them, 49.8% were married couples living together, 10.0% had a female householder with no husband present, 6.6% had a male householder with no wife present, and 33.6% were non-families. 25.3% of all households were made up of individuals, and 3.7% had someone living alone who was 65 years of age or older. The average household size was 2.64 and the average family size was 3.18.

All content from Kiddle encyclopedia articles (including the article images and facts) can be freely used under Attribution-ShareAlike license, unless stated otherwise. Cite this article:
Gaston, Oregon Facts for Kids. Kiddle Encyclopedia.