Corvallis is a city in central western Oregon, United States. It is the county seat of Benton County and the principal city of the Corvallis, Oregon Metropolitan Statistical Area, which encompasses all of Benton County. As of the 2010 United States Census, the population was 54,462. Its population was estimated by the Portland Research Center to be 55,298 in 2013. Corvallis is the location of Oregon State University, a large Hewlett-Packard research campus, and Good Samaritan Regional Medical Center. 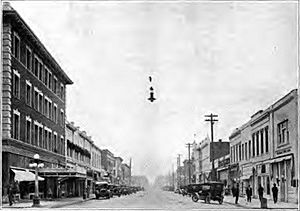 In October 1845, Joseph C. Avery arrived in Oregon from the east. Avery took out a land claim at the mouth of Marys River where it flows into the Willamette River and in June 1846 took up residence there in a log cabin hastily constructed to hold what seemed a potentially lucrative claim. Avery's primitive 1846 dwelling was the first home within the boundaries of today's Corvallis and his land claim included the southern section of the contemporary city.

Avery was quickly joined by other settlers along the banks of the Willamette River, including a 640-acre claim directly to his north taken in September 1846 by William F. Dixon. The discovery of gold in California in 1848 temporarily stalled development of a township, with Avery leaving his Oregon claim to try his hand at mining in the fall of that year. His stay would prove to be brief and in January 1849 Avery returned to Oregon with a small stock of provisions with a view to opening a store.

During the year 1849, Avery opened his store at the site, platted the land, and surveyed a town site on his land claim, naming the community Marysville. It is possible that the city was named after early settler Mary Lloyd, but now the name is thought to be derived from French fur trappers' naming of Marys Peak after the Virgin Mary.

In the summer of 1851 Joseph Avery and William Dixon each granted back-to-back 40 acre land parcels from their land holdings for the establishment of a county seat. Avery's holding lay to the south and Dixon's to the north, with the Benton Country Courthouse marking the approximate line of demarcation between these two land parcels.

A heated debate followed, with the name ultimately awarded to Marysville in an act passed on December 20, 1853. By way of rationale, it was successfully argued that the name "Marysville" duplicated the moniker of a town in California located on the same stagecoach route and that a name change was thus necessary to avoid confusion.

A faction within the deeply divided legislature sought to make Corvallis the capital of the Oregon Territory, and in December 1855 the 6th Territorial Legislature initially convened there before returning to Salem later that month — the town which would eventually be selected as the permanent seat of state government.

Corvallis was incorporated as a city on January 29, 1857.

Nineteenth-century Corvallis saw a three-year boom beginning in 1889, which began with the establishment of a privately owned electrical plant by L.L. Hurd. A flurry of publicity and public and private investment followed, including construction of a grand county courthouse, planning and first construction of a new street railway, construction of a new flour mill along the river between Monroe and Jackson Avenues, and construction of the Hotel Corvallis, today known as the Julian Hotel.

In addition a carriage factory was launched in the city and the town's streets were improved, while the size of the city was twice enlarged through annexation. Bonds were issued for a city-owned water works, a sewer system, and for public ownership of the electric plant. A publicity campaign was launched to attempt to expand the tax base through new construction for new arrivals. This effort proved mostly unsuccessful, however, and in 1892 normalcy returned, with the city saddled with about $150,000 in bonded debt.

Corvallis is at an elevation of 235 feet (72 m) above sea level. Situated midway in the Willamette Valley, Corvallis is about 46 miles (74 km) east of Newport and the Oregon Coast, 85 miles (137 km) south of Portland, 30 miles (48 km) south of the state capital, Salem, 10 miles (16 km) southwest of Albany, about 10 miles (16 km) west of Interstate 5 at its closest point, and 48 miles (77 km) north of Eugene/Springfield. Oregon Route 99W, a secondary north–south route, also runs through Corvallis. U.S. Route 20 (which leads to Newport) and Oregon Route 34 (which leads to Waldport about 56 miles (90 km) to the west) both secondary East-West routes run through Corvallis from the Oregon Coast. Corvallis is at river mile 131–32 of the Willamette River. 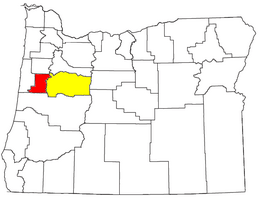 Like the rest of the Willamette Valley, Corvallis falls within the dry-summer subtropical climate zone, also referred to as cool-summer Mediterranean (Köppen Csb). Temperatures are mild year round, with warm, dry sunny summers and mild, wet winters with persistent overcast skies. Spring and fall are also moist seasons with varied cloudiness, and light rain falling for extended periods.

Winter snow is rare, but occasionally does fall, and amounts can range between a dusting and a few inches that does not persist on the ground for more than a day. The northwest hills will often experience more snow. During the mid-winter months after extended periods of rain, thick persistent fogs can form, sometimes lasting the entire day. This can severely reduce visibility to as low as 20 feet (6.1 m). The fog will often persist until a new storm system enters the area. This fog could be seen as a type of tule fog.

Rainfall total within the town itself is surprisingly variable. This is due to Corvallis lying right on the eastern edge of the Oregon Coast Range, with a small portion of the town inside of the range. Rainfall amounts can range from an average of 66.40 inches (168.7 cm) per year in the far northwest hills, compared to 43.66 inches (110.9 cm) per year at Oregon State University which is located in the center of Corvallis.

Because of its close proximity to the coastal range, Corvallis can experience slightly cooler temperatures, particularly in the hills, than the rest of the Willamette Valley. The average annual low temperature is 4 degrees less than that of Portland just 85 miles (137 km) to the north. Despite this, temperatures dropping far below freezing are still a rare event.

Corvallis is the largest principal city of the Albany-Corvallis-Lebanon CSA, a Combined Statistical Area that includes the Corvallis metropolitan area (Benton County) and the Albany-Lebanon micropolitan area (Linn County), which had a combined population of 202,251 at the 2010 U.S. Census.

There were 22,283 households of which 20.7% had children under the age of 18 living with them, 35.3% were married couples living together, 7.0% had a female householder with no husband present, and 54.0% were non-families. 33.2% of all households were made up of individuals and 8.9% had someone living alone who was 65 years of age or older. The average household size was 2.22 and the average family size was 2.82.

In 1903, Franz Edmund Creffield, commonly known as Edmund Creffield (c. 1870–1906), a German-American religious leader who called himself Joshua, founded a movement in Corvallis which became known locally as the "Holy Rollers".

Corvallis lies in the middle of the Unchurched Belt. A 2003 study, released once every 10 years, listed Benton County (of which Corvallis makes up the majority of the population) as the least religious county per capita in the United States. Only 1 in 4 people indicated that they were affiliated with one of the 149 religious groups the study identified. The study indicated that some of the disparity, however, may be attributed to the popularity of less common religions (ones not included as an option in the study) in the Pacific Northwest. 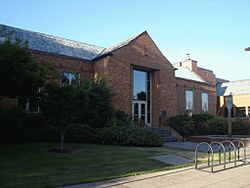 Corvallis is recognized as a Tree City USA. The city has at least 47 public parks within and adjacent to the city limits.

Long-distance bus service is provided by Greyhound. It stops at the Greyhound station in downtown Corvallis (station ID: CVI.)

Local bus service is provided by Corvallis Transit System (CTS). In January 2011, the Corvallis City Council approved an additional fee on monthly water utility bills allowing all CTS bus service to become fareless. The system runs a total of eight daytime routes Monday through Saturday, covering most of the city and converging at a Downtown Transit Center. Additional commuter routes also run in the early morning and late afternoon on weekdays, and mid-morning and mid-afternoon on Saturdays. When Oregon State University is in session CTS also runs the "Beaver Bus," a set of late-night routes running Thursday through Saturday.

Two other short-distance inter-city buses, the Linn-Benton Loop (to Albany) and the Philomath Connection, also stop at the Downtown Transit Center.

From 2010 to 2011, CTS has seen a 37.87% increase in ridership, partially as a result of going fareless and "the rising cost of fuel for individual vehicles and the desire for residents to choose more sustainable options for commuting to work, school and other activities" According to Tim Bates the Corvallis Transit System and Philomath Connection, had 3,621,387 passenger miles traveled and 85,647 gallons of fuel consumed in Fiscal Year 2011, a period that covers July 1, 2010 - June 30, 2011. This means that riders in Fiscal Year 2011 got 42.28 passenger miles per gallon.

The League of American Bicyclists gave Corvallis a gold rating as a Bicycle-Friendly Community in 2011. Also, according to the United States Census Bureau's 2008–12 American Community Survey, 11.2 percent of workers in Corvallis bicycle to work. The city of Corvallis is ranked third highest among 'small' U.S. cities (with populations under 200,000) for bicycle commuters, behind Key West, Florida (17.4) and Davis, California (18.6).

The city's water system contains two water treatment plants, nine processed water reservoirs, one raw water reservoir, and some 210 miles (340 km) of pipe. The system can process up to about 19 million US gallons (72,000 m3) of water per day.

The Rock Creek treatment plant processes water from sources in the 10,000-acre (40 km2) Rock Creek Municipal Watershed near Marys Peak. The three sources are surface streams which are all tributaries of the Marys River. Rock Creek has a processing capacity of 7 million US gallons (26,000 m3) of water per day (gpd), though operational characteristics of the 9-mile (14 km), 20-inch (51 cm) pipeline to the city limits capacity to half that. The Rock Creek Plant output remains steady year round at about 3 million US gallons (11,000 m3).

The total reservoir capacity is 21 million US gallons (79,000 m3), though measures to voluntarily reduce water usage begin when reservoir levels fall below 90 percent of capacity, and become mandatory at 80 percent or below. As part of its ongoing water conservation program, the water department jointly publishes a guide to water-efficient garden plants.

According to the federal Environmental Protection Agency report on its “green power communities,” Corvallis is among the top cities in the nation in terms of buying electricity produced from renewable resources. Corvallis purchases more than 126 million kilowatt-hours of green power annually, which amounts to 21 percent of the city’s total purchased electricity.

As of 2012 the Corvallis Fire Department is headed by Chief Roy Emery and currently has six fire stations.

All content from Kiddle encyclopedia articles (including the article images and facts) can be freely used under Attribution-ShareAlike license, unless stated otherwise. Cite this article:
Corvallis, Oregon Facts for Kids. Kiddle Encyclopedia.