Philomath ( fi-LOH-məth) is a city in Benton County, Oregon, United States. It was named for Philomath (Greek, "love of learning") College. The population was 4,584 at the 2010 census and was most recently estimated in 2019 to have a population of 5,666. It is part of the Corvallis, Oregon, Metropolitan Statistical Area.

Philomath was named after the Philomath College that was founded in 1867 by the United Brethren Church. The name of the college and city was derived from two Greek words meaning "lover of learning". The city was incorporated on October 20, 1882. The college closed in 1929 due to a dramatic decline in enrollment.

This region experiences warm (but not hot) and dry summers, with no average monthly temperatures above 71.6 °F (22.0 °C). According to the Köppen Climate Classification system, Philomath has a warm-summer Mediterranean climate, abbreviated "Csb" on climate maps.

There were 1,733 households, of which 38.2% had children under the age of 18 living with them, 51.7% were married couples living together, 14.0% had a female householder with no husband present, 3.8% had a male householder with no wife present, and 30.6% were non-families. 23.4% of all households were made up of individuals, and 5.9% had someone living alone who was 65 years of age or older. The average household size was 2.64 and the average family size was 3.11.

The film Clear Cut: The Story of Philomath, Oregon documents the clash of cultures in Philomath between the old-time timber industry and the professionals and techies of the information age. The film was shown in the Sundance Film Festival in 2006.

In 2020, Philomath residents were among the first in the world to receive their food deliveries from a robot; Daxbot, which is built by a Philomath-based business.  Daxbot is a 36in, semi-autonomous delivery robot who can keep food hot or cold, and makes free deliveries for businesses and individuals in Philomath.  The Philomath City Council gave Nova Dynamics permission to allow Dax to make deliveries and travel in town. Dax is considered a pedestrian, not a vehicle, and shares roads and sidewalks with other pedestrians, cyclists, and motorists. 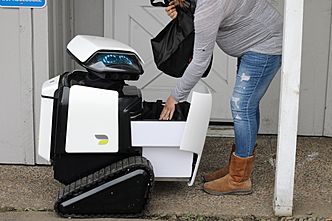 Daxbot delivering in Philomath OR

Philomath is served by the Philomath School District, which includes the following schools:

All content from Kiddle encyclopedia articles (including the article images and facts) can be freely used under Attribution-ShareAlike license, unless stated otherwise. Cite this article:
Philomath, Oregon Facts for Kids. Kiddle Encyclopedia.