Adair Village is a city in Benton County, Oregon, United States. The population was 840 at the 2010 census.

Adair Village was named after the World War II military installation Camp Adair. When the war ended, the camp was closed and most of the buildings removed, except for the hospital, which in 1946 was leased to Oregon State University for student and faculty housing. The university converted the hospital into apartments, a local government was organized, and Adair Village post office established in 1947.

When the postwar enrollment boom dwindled, Oregon State gave up its lease, and the United States Air Force maintained the base as a radar station. Adair Village post office closed in 1951, and Adair Air Force Station post office took its place from 1961 through 1969. The Air Force ceased operations and sold the property, with the individual houses being placed on the market. Adair Village incorporated in 1976. Adair Village city hall is one of the original World War II buildings.

According to the United States Census Bureau, the city has a total area of 0.23 square miles (0.60 km2), all of it land.

The city is part of the Corvallis, Oregon, Metropolitan Statistical Area. 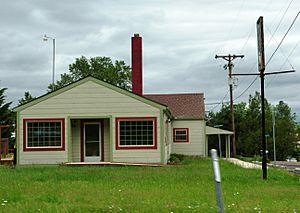 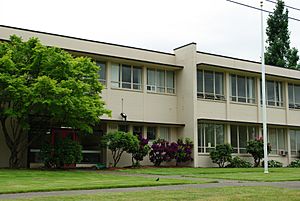 There were 279 households, of which 57.0% had children under the age of 18 living with them, 57.7% were married couples living together, 19.7% had a female householder with no husband present, 3.9% had a male householder with no wife present, and 18.6% were non-families. 12.9% of all households were made up of individuals, and 1.1% had someone living alone who was 65 years of age or older. The average household size was 3.01 and the average family size was 3.30.

The Oregon Department of Fish and Wildlife-administered E. E. Wilson Wildlife Area forms the northern border of the city.

All content from Kiddle encyclopedia articles (including the article images and facts) can be freely used under Attribution-ShareAlike license, unless stated otherwise. Cite this article:
Adair Village, Oregon Facts for Kids. Kiddle Encyclopedia.