Albany is the county seat of Linn County, and the 11th largest city in the State of Oregon. Albany is located in the Willamette Valley at the confluence of the Calapooia River and the Willamette River in both Linn and Benton counties, just east of Corvallis and south of Salem. It is predominantly a farming and manufacturing city that settlers founded around 1848. As of the 2010 United States Census, the population of Albany was 50,158. Its population was estimated by the Portland Research Center to be 51,583 in 2013.

Albany has a home rule charter, a council–manager government, and a full-time unelected city manager. The city provides the population with access to over 30 parks and trails, a senior center, and many cultural events such as River Rhythms and Mondays at Monteith. In addition to farming and manufacturing, the city's economy depends on retail trade, health care, and social assistance. In recent years the city has worked to revive the downtown shopping area, with help from The Central Albany Revitalization Area.

In the historic era, the area of the Willamette Valley that makes up modern-day Albany was inhabited by one of the tribes of the Kalapuya a Penutian-speaking, Native American people. The Kalapuya had named the area Takenah, a Kalapuyan word used to describe the deep pool at the confluence of the Calapooia and Willamette rivers. A variation of the place name can also be written as Tekenah.

The Kalapuya population in the valley was between 4,000 and 20,000 before contact with Europeans, but they suffered high mortality from new infectious diseases introduced shortly afterward. The tribes were decimated by a smallpox epidemic that raged through the Pacific Northwest in 1782–83. A malaria outbreak swept through the region between 1830 and 1833. It is estimated that as many as 90 percent of the Kalapuya population died during this period. That, coupled with the treaties signed during the 1850s by the Kalapuya to cede land to the United States, left the area nearly free for European Americans to settle.

The first European American settler arrived in 1845; Abner Hackleman was a farmer from Iowa. Taking up a land claim for himself, Hackleman asked Hiram N. Smead to hold another for him until his son arrived from Iowa. In 1846, a year after arriving in Oregon, Hackleman died while returning to Iowa to fetch his family. In 1847 a pair of brothers, Walter and Thomas Monteith, settled in the area, after traveling by ox team along the Oregon Trail from their native state of New York. They were a family of early prominence in the area; in 1848, they bought a claim of 320 acres (1.3 km2) from Hiram Smead for $400 and a horse; they plotted out 60 acres (240,000 m2) for the town site. They named the city "Albany" after their hometown of Albany in New York. During the same period, Hackleman's son Abram reached his father's original land claim and built a log house in an oak grove still known as Hackleman's Grove. He later built a house, which still stands at the corner of Fifth and Jackson. The small settlement that formed on the Hackleman land became known as the community of Takenah in 1849. 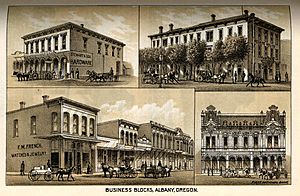 During this early period, the Monteith and Hackleman families were literally and politically on opposite sides of the fence. Residents in the Monteiths' portion of town were mainly merchants and professionals, who aligned with the Republican Party. They tended to sympathize with the Union during the Civil War. The residents in Hackleman's portion of town to the east were made up mostly of working-class Democrats who sided with the Confederacy. The two sides planted a hedge near Baker Street separating their sides of town.

With help from Samuel Althouse, the Monteiths built the first frame house in Albany in 1849. The Monteith House was considered the finest house in Oregon at the time. That same year the start of the California Gold Rush had caught the attention of the Monteith brothers, who provided supplies to the gold fields; their profits were seed money for several new businesses in Albany, including the general store. After the Monteiths developed these businesses, Albany became a major hub city in the Willamette Valley.

Albany's first school was established in 1851 by the town's first physician, R. C. Hill. The first school teacher was Eleanor B. Hackleman, wife of Abram Hackleman. It was not until 1855 that a building was specifically erected for use as a school. In 1852, the first steamboat, the Multnomah, arrived and the first flour mill was built. 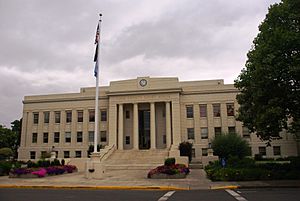 On January 8, 1850, a U.S. post office was established in Albany, with John Burkhart appointed as the first U.S. Postmaster. The town was renamed as "New Albany" on November 4, 1850, but the name was changed back to Albany in 1853. In 1851, Albany was designated as the county seat, replacing Calapooia (near modern-day Brownsville and Sweet Home), and all court meetings were held there. The first Albany courthouse was built in 1852 on 10 acres (4.0 ha) of land donated by the Monteiths to ensure Albany would remain the county seat. The new two-story octagonal courthouse was completed on April 26, 1853. The courthouse has since been replaced, but the new courthouse stands on the same site.

During 1853–1854, residents of the east side of Albany persuaded the Oregon Legislative Assembly to name both towns Takenah. Though Takenah meant "deep pool," in reference to the confluence of the Calapooia and Willamette rivers, it was commonly translated as "Hole in the Ground". Partially due to this translation, the legislature restored the name Albany to the town in 1855. Finally in 1864, 16 years after the Monteiths founded the town and 19 years after the first European Americans arrived, it became incorporated as a city. 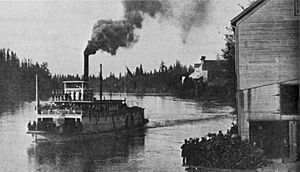 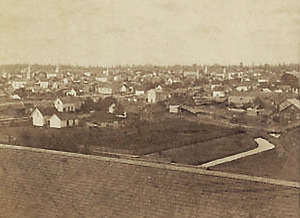 View of bucolic Albany during the decade of the 1880s.

In 1871, the trains first reached Albany, connecting it to other towns in the valley. The arrival of the first train was celebrated as the greatest event in Albany's history. Albany businessmen raised $50,000 to ensure that the rails would be built through the city, instead of bypassing it a few miles eastward. The train brought the farmers' markets closer to the city, as stagecoaches and steamboats gave way to the railroad. The world's longest wooden railroad drawbridge was built in 1888 for the Albany-Corvallis run. By 1910, 28 passenger trains departed daily from Albany going in five directions.

In 1872, the Santiam Ditch and Canal Company was organized, and a canal running from the Santiam near Lebanon was completed that autumn. The canal runs 18 miles (29 km) from the south side of Albany and divides at the corner of Vine and Eight streets, with one branch running down Vine Street and emptying into Calapooia Creek, with a drop of 32 feet (9.8 m). The other runs down Eighth to Thurston Street.

In 1924 Pacific Power installed a turbine where the canal meets the river to generate electricity. In 1984 the city bought the water system from Pacific Power, and shut down the plant in 1991. By 2003 the city had approved a plan to restart the four megawatt-hour hydroelectric plant and in February 2009 the plant opened again. Albany was the headquarters for the Mountain States Power Company from its establishment in 1918 until its merger into Pacific Power & Light (now PacifiCorp) in 1954.

In the 1940s, the city started the Albany World Championship Timber Carnival, which drew competitors from all over the world to participate in logging skills contests. The event took place over the four days of the Fourth of July weekend. Men and women would compete in climbing, chopping, bucking, and burling contests. In 2001 the carnival was cancelled because of smaller crowds and the state’s declining timber economy.

In 1916 Kuo-Ching Li, a Chinese-American engineer, founded Wah Chang Trading Corporation in New York State, but it was based in Albany. He developed it as an international tungsten ore and concentrate trading company, leading the company until his death in 1961. He served as president until 1960 and then board chairman.

The U.S. Bureau of Mines established a research center on the former Albany College campus in 1942, focusing on the development of new metallurgical processes. First known as the Northwest Electro-development Facility, the site produced titanium and zirconium. It fostered the growth of a new rare metals industry in Albany, led by internationally recognized companies such as the Oregon Metallurgical Company, Oremet, and Wah Chang. In the 1970s, Albany attempted to extend its city limits to include a zirconium processing plant of Wah Chang Corporation in order to increase its industrial tax base. Wah Chang responded in 1974 by sponsoring a vote to incorporate the desired properties as Millersburg. When the Bureau of Mines closed in 1996, the facility was transferred to the United States Department of Energy's Office of Fossil Energy. In 2005 the facility became part of the National Energy Technology Laboratory. 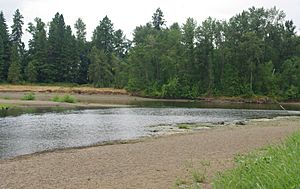 Albany is in the central part of Oregon's most populated region, the Willamette Valley. The city rests along the confluence of the Calapooia and Willamette rivers, and although most of Albany falls within Linn County, a smaller portion of the city rests to the north of its downtown on the west bank of the Willamette River in Benton County.

According to the United States Census Bureau, the city has a total area of 17.75 square miles (45.97 km2), of which 17.54 square miles (45.43 km2) is land and 0.21 square miles (0.54 km2) is water. Albany has 21.7 square miles (56 km2) within its urban growth boundary. Throughout the city limits and urban growth area, there are limited hills; the city is one of the lowest points along the Willamette Valley, with elevations ranging 180 to 430 feet (55 to 131 m) above sea level. The North Albany District has the most variable elevation, while the downtown and southern end of town have little elevation change throughout.

Albany and the surrounding area was left devastated by the Columbus Day Storm in October 1962.

There were 19,705 households of which 33.7% had children under the age of 18 living with them, 47.8% were married couples living together, 12.4% had a female householder with no husband present, 5.2% had a male householder with no wife present, and 34.6% were non-families. 26.7% of all households were made up of individuals and 9.9% had someone living alone who was 65 years of age or older. The average household size was 2.50 and the average family size was 3.01.

All content from Kiddle encyclopedia articles (including the article images and facts) can be freely used under Attribution-ShareAlike license, unless stated otherwise. Cite this article:
Albany, Oregon Facts for Kids. Kiddle Encyclopedia.