Jerry Andrus (January 28, 1918 – August 26, 2007) was an American magician and writer known internationally for his original close-up, sleight-of-hand tricks and optical illusions, such as the "Linking Pins".

Andrus was born January 28, 1918 in Sheridan, Wyoming. At the age of 10, he moved to Albany, Oregon, where he lived until his death in 2007. At 12, Andrus became interested in the art of illusion when he saw a performance of a reformed "spiritual medium". He joined the International Society of Junior Magicians when he was 16 and by his 40s became known as a "magician's magician". According to long-time friend Ray Hyman, Jerry's mother was a fundamentalist Christian, and his father died when Jerry was young. Jerry became a skeptic when he was about 12. His middle school had lost a basketball game to a rival school, and students were blaming the referees for bad calls as the reason for the loss. Jerry had an epiphany that the other school would be saying the same thing if the loss had gone the other way. From that moment on, Jerry began to challenge the beliefs he had taken for granted before.

A self-taught magician, Andrus preferred to develop his own style rather than learn the craft as traditionally handed down from other magicians, eventually becoming one of the "best and most-influential 'close-up magic' performers ever." He was known to many accomplished contemporary magicians, such as Lance Burton, Doug Henning, and Penn & Teller, for this unique brand of close-up, sleight-of-hand magic.

An early member of The Magic Castle in Hollywood, California, Andrus performed there semi-annually until shortly before his death. "With over 5,000 members at the Magic Castle... this gentleman's membership number is #306; he has been performing here since we opened our doors." 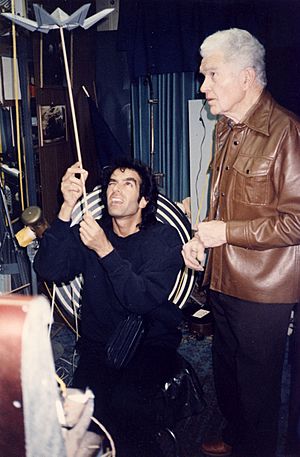 David Copperfield visits Andrus at the Castle of Chaos

Ray Hyman believes that he was responsible for getting Andrus interested in optical illusions. Hyman showed him the Mach-Eden illusion using an index card. Andrus didn't seem interested, but came back to Hyman some time later and showed him how he had improved it by inventing an illusion of a house. 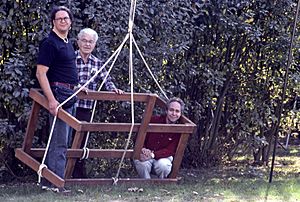 Speaking at the Skeptic's Toolbox about the importance of understanding optical illusions, Andrus said, "The point of demonstrating illusions is not merely to show we can be fooled... rather to appreciate that the human mind is in fact working correctly... we look at a parked car on the street, we assume that the part of the car we can't see is there too; our brains have to do this so that we can make sense of the world around us".

In 1954, Andrus created the famous "Linking Pins", a close-up illusion in which closed safety pins are rapidly linked together in twos, threes and chains. 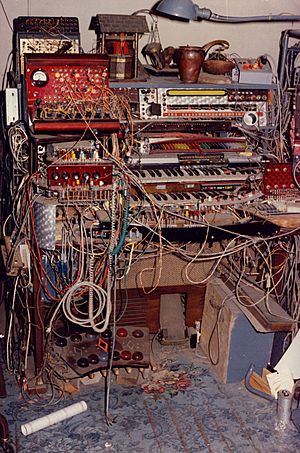 Invited by long-time friend and fellow magician Ray Hyman, Andrus brought many of his optical illusions to the annual Skeptic's Toolbox, held each August on the University of Oregon's campus. Two of the more popular Andrus illusions the "impossible box" and "Oregon vortex plank illusion" are explained in a 1994 Skeptical Inquirer article.

In the months before his death, Andrus continued to invent illusions. His media were common household items: metal springs, rope, wire, cardboard, wood 2 X 4's and steel rods. Many of his illusions are viewable on the Internet and some have already expanded on his inventions. 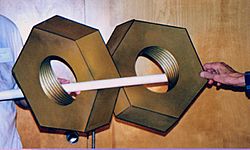 Some of his illusions - including "Crazy Nuts" and "Magic Square" - are currently on exhibit at Puzzling World in New Zealand.

An avowed scientific skeptic and agnostic, Andrus often lectured at scientific and skeptic conferences, using his optical illusions and magic tricks to demonstrate the ease with which the mind can be fooled by the eye. He discussed a form of cognitive science that attempted to explain that because the mind is working on an unconscious level, it can be fooled into misperceiving apparently normal sensory experiences. "There are a lot of people who believe in the paranormal... when it comes to objective evidence apparently, I don't believe there is anything."

Andrus and Ray Hyman appeared on a Canadian TV show in 1975 where they explained and duplicated the "paranormal" tricks Uri Geller had performed for host Dick Klinger the week prior. Klinger asked, "Does Uri Geller have any supernatural powers?" Andrus answered simply, "No".

At a meeting of the executive council of the Committee for Skeptical Inquiry (CSI) in Denver, Colorado in April 2011, Andrus was selected for inclusion in CSI's Pantheon of Skeptics. The Pantheon of Skeptics was created by CSI to remember the legacy of deceased fellows of CSI and their contributions to the cause of scientific skepticism.

Andrus called his home, located in Albany, Oregon, the "Castle of Chaos" in reference to the numerous items he collected over the years with the hope of using them to "make something spectacular." The castle is where he invented and created his illusions. He often hosted events and tours for magicians and fans, and in 1982 the magician organization M-U-M visited: "The affair was enhanced by conducted tours of the Castle of Chaos by our host, Jerry, and I am happy to report that most of those present who went on the tours got back safely. A few are still missing, but they aren't really important. Jerry Andrus was a most congenial host; and once he almost laughed; but he caught himself in time." Omni visited his home for the TV special The New Frontier, hosted by Peter Ustinov. The program showcased Andrus playing the organ he invented, which was designed so that the keys, when played, turned lights located around the home on and off .

In 1996, Jerry Andrus demonstrated some of his inventions in his home in episode 77 of Bill Nye the Science Guy.

In October 2011, the "Castle of Chaos" was placed on the National Register of Historic Places.

In July 2013, the "Castle of Chaos", currently also known as the "Keyhole House", was included on the city of Albany Historic Interior Home Tour. The newly restored home, which is owned by Jacho and Emma Eaton, maintains photos, clippings and other memorabilia from Jerry Andrus's life and career. "Jerry Andrus managed to live right under our noses while having museum exhibitions in other parts of the world and exchanging ideas with scholars, children and magicians alike, without anyone knowing — even suspecting — who he really was," she [Emma Eaton] said." 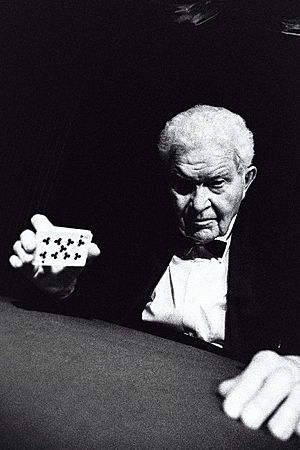 Andrus performs at The Magic Castle in Hollywood, California

Andrus died of cancer at age 89. When asked when did he first meet Jerry Andrus, magician James Randi said, "That's hard to say, Jerry was one of those guys I thought I always knew... I met him in New York City in the company of Martin Gardner. Jerry was the most honest man I ever knew...he could not lie about anything...He was a genius, a fine man and, yes, I miss him every day." In a similar vein, Ray Hyman quoted Andrus as saying, "He was legendary for his honesty. He would never tell a lie or anything." In his last phone conversation with Randi, Andrus said, "I've been every place I've ever wanted to go, I've met everyone I've wanted to meet...I've never done this before, and you don't get a second chance out of it, I'm told. I'm observing really interesting things. I wish they wouldn't fill me with so many chemicals because I want to make some notes".

When asked about Andrus's contributions, Michael Shermer said, "How easy it is to fool...and that tells us something about how the mind works...the psychology and deception of illusion, which is important".

Dai Vernon said, "I've been trying to think of superlatives I'm acquainted with and I find them entirely inadequate to describe the many revolutionary ideas incorporated in the magic of Jerry Andrus". Harry Blackstone Sr. said, "May I compliment you on the best close-up magic I've ever seen". Eddie Clever said, "Thanks for putting Magic back in magic".

Martin Gardner said, "Never have I watched a close-up magician more constantly who completely knocked me over. Jerry Andrus is an original. His methods are unlike those of any magicians...his effects have to be seen to be not believed". 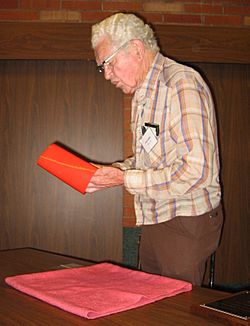 All content from Kiddle encyclopedia articles (including the article images and facts) can be freely used under Attribution-ShareAlike license, unless stated otherwise. Cite this article:
Jerry Andrus Facts for Kids. Kiddle Encyclopedia.