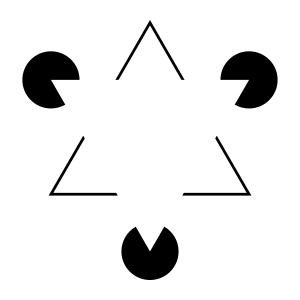 The Yellow lines are the same length. Click on the name at bottom of pictue for an explanation. 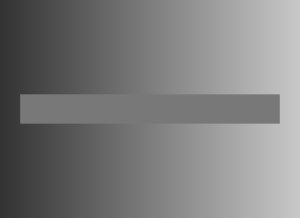 Simultaneous Contrast Illusion. The background is a colour gradient and progresses from dark grey to light grey. The horizontal bar appears to progress from light grey to dark grey, but is in fact just one colour. 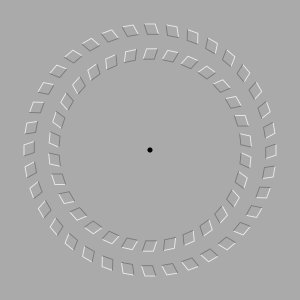 An optical illusion. The two circles seem to move when the viewer's head is moving forwards and backwards while looking at the black dot. 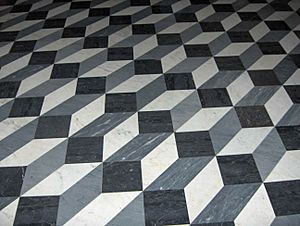 Floor tiles at the Basilica of St. John Lateran in Rome. The pattern creates an illusion of three-dimensional boxes.

An optical illusion (also called a visual illusion) is one which shows images that differ from normal reality.

The information gathered by the eye is processed in the brain to give a perception. That is normal, but in these cases the appearance does not tally with a physical measurement of the stimulus source.

There are three main types of visual illusion:

The general explanation for most illusions is the way the brain works on sense data to produce a meaningful perception. A great 19th century psychologist Hermann von Helmholtz described perception as "unconscious inferences from sensory data and past experience". Richard Gregory discussed how the brain makes an hypothesis about what's out there, and sometimes the hypothesis does not quite work out. His model of perception is an interaction between data from sense organs and previous knowledge and experience.

Researcher Mark Changizi of Rensselaer Polytechnic Institute in New York thinks optical illusions are due to a 'neural lag'. When light hits the retina, about one-tenth of a second goes by before the brain translates the signal into a visual perception of the world. Scientists have known of the lag, and have discussed how humans compensate for it. Some suggest that our motor system somehow modifies our movements to offset the delay.

Changizi asserts that the human visual system has evolved to compensate for neural delays by generating images of what will occur one-tenth of a second into the future. This foresight enables humans to react to events in the present, enabling humans to perform reflexive acts like catching a fly ball and to maneuver smoothly through a crowd. Illusions occur when our brains attempt to perceive the future, and those perceptions do not match reality.

Essentially, the ideas of Helmholz, Gregory and Changizi are similar. We do not mechanically turn sense data into a picture of the world, as some had thought. What we do is use our brains to work out what it is we are looking at. This involves the use of memory and logic, though at a fast rate. The process is very good, but not foolproof. When it fails we get an illusion.

All content from Kiddle encyclopedia articles (including the article images and facts) can be freely used under Attribution-ShareAlike license, unless stated otherwise. Cite this article:
Optical illusion Facts for Kids. Kiddle Encyclopedia.