The Necker cube and Rubin vase can be perceived in more than one way. 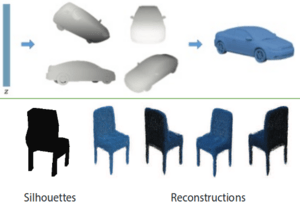 Humans are able to have a very good guess on the underlying 3D shape category/identity/geometry given a silhouette of that shape. Computer vision researchers have been able to build computational models for perception that exhibit a similar behavior and are capable of generating and reconstructing sensible 3D shapes from single or multi-view depth maps or silhouettes

Perception (from the Latin perceptio) is the organization, identification, and interpretation of sensory information in order to represent and understand the presented information, or the environment.

All perception involves signals that go through the nervous system, which in turn result from physical or chemical stimulation of the sensory system. For example, vision involves light striking the retina of the eye, smell is mediated by odor molecules, and hearing involves pressure waves.

Perception is not only the passive receipt of these signals, but it's also shaped by the recipient's learning, memory, expectation, and attention.

Perception can be split into two processes,

Perception depends on complex functions of the nervous system, but subjectively seems mostly effortless because this processing happens outside conscious awareness.

Since the rise of experimental psychology in the 19th century, psychology's understanding of perception has progressed by combining a variety of techniques. Psychophysics quantitatively describes the relationships between the physical qualities of the sensory input and perception. Sensory neuroscience studies the neural mechanisms underlying perception. Perceptual systems can also be studied computationally, in terms of the information they process. Perceptual issues in philosophy include the extent to which sensory qualities such as sound, smell or color exist in objective reality rather than in the mind of the perceiver.

Although the senses were traditionally viewed as passive receptors, the study of illusions and ambiguous images has demonstrated that the brain's perceptual systems actively and pre-consciously attempt to make sense of their input. There is still active debate about the extent to which perception is an active process of hypothesis testing, analogous to science, or whether realistic sensory information is rich enough to make this process unnecessary.

The perceptual systems of the brain enable individuals to see the world around them as stable, even though the sensory information is typically incomplete and rapidly varying. Human and animal brains are structured in a modular way, with different areas processing different kinds of sensory information. Some of these modules take the form of sensory maps, mapping some aspect of the world across part of the brain's surface. These different modules are interconnected and influence each other. For instance, taste is strongly influenced by smell.

History of the study of perception

Perception is one of the oldest fields within scientific psychology, and there are correspondingly many theories about its underlying processes. The oldest quantitative law in psychology is the Weber-Fechner law, which quantifies the relationship between the intensity of physical stimuli and their perceptual effects. It was the study of perception that gave rise to the Gestalt school of psychology, with its emphasis on holistic approach. To analyse and perceive differently.

In many ways, vision is the primary human sense. Light is taken in through each eye and focused in a way which sorts it on the retina according to direction of origin. A dense surface of photosensitive cells, including rods, cones, and intrinsically photosensitive retinal ganglion cells captures information about the intensity, color, and position of incoming light. Some processing of texture and movement occurs within the neurons on the retina before the information is sent to the brain. In total, about 15 differing types of information are then forwarded to the brain proper via the optic nerve. 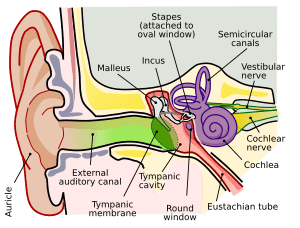 Anatomy of the human ear. (The length of the auditory canal is exaggerated in this image).

Hearing (or audition) is the ability to perceive sound by detecting vibrations. Frequencies capable of being heard by humans are called audio or sonic. The range is typically considered to be between 20 Hz and 20,000 Hz. Frequencies higher than audio are referred to as ultrasonic, while frequencies below audio are referred to as infrasonic. The auditory system includes the outer ears which collect and filter sound waves, the middle ear for transforming the sound pressure (impedance matching), and the inner ear which produces neural signals in response to the sound. By the ascending auditory pathway these are led to the primary auditory cortex within the temporal lobe of the human brain, which is where the auditory information arrives in the cerebral cortex and is further processed there.

Sound does not usually come from a single source: in real situations, sounds from multiple sources and directions are superimposed as they arrive at the ears. Hearing involves the computationally complex task of separating out the sources of interest, often estimating their distance and direction as well as identifying them.

Haptic perception is the process of recognizing objects through touch. It involves a combination of somatosensory perception of patterns on the skin surface (e.g., edges, curvature, and texture) and proprioception of hand position and conformation. People can rapidly and accurately identify three-dimensional objects by touch. This involves exploratory procedures, such as moving the fingers over the outer surface of the object or holding the entire object in the hand. Haptic perception relies on the forces experienced during touch.

Taste (or, the more formal term, gustation) is the ability to perceive the flavor of substances including, but not limited to, food. Humans receive tastes through sensory organs called taste buds, or gustatory calyculi, concentrated on the upper surface of the tongue. The human tongue has 100 to 150 taste receptor cells on each of its roughly ten thousand taste buds. There are five primary tastes: sweetness, bitterness, sourness, saltiness, and umami. Other tastes can be mimicked by combining these basic tastes. The recognition and awareness of umami is a relatively recent development in Western cuisine. The basic tastes contribute only partially to the sensation and flavor of food in the mouth — other factors include smell, detected by the olfactory epithelium of the nose; texture, detected through a variety of mechanoreceptors, muscle nerves, etc.; and temperature, detected by thermoreceptors. All basic tastes are classified as either appetitive or aversive, depending upon whether the things they sense are harmful or beneficial.

Smell is the process of absorbing molecules through olfactory organs. Humans absorb these molecules through the nose. These molecules diffuse through a thick layer of mucus, come into contact with one of thousands of cilia that are projected from sensory neurons, and are then absorbed into one of, 347 or so, receptors. It is this process that causes humans to understand the concept of smell from a physical standpoint.

Smell is also a very interactive sense as scientists have begun to observe that olfaction comes into contact with the other sense in unexpected ways.

Smell is also the most primal of the senses. It has been the discussion of being the sense that drives the most basic of human survival skills as it being the first indicator of safety or danger, friend or foe. It can be a catalyst for human behavior on a subconscious and instinctive level.

Social perception is the part of perception that allows people to understand the individuals and groups of their social world, and thus an element of social cognition. 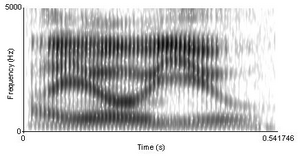 Though the phrase "I owe you" can be heard as three distinct words, a spectrogram reveals no clear boundaries.

Speech perception is the process by which spoken languages are heard, interpreted and understood. Research in speech perception seeks to understand how human listeners recognize speech sounds and use this information to understand spoken language. The sound of a word can vary widely according to words around it and the tempo of the speech, as well as the physical characteristics, accent and mood of the speaker. Listeners manage to perceive words across this wide range of different conditions. Another variation is that reverberation can make a large difference in sound between a word spoken from the far side of a room and the same word spoken up close. Experiments have shown that people automatically compensate for this effect when hearing speech.

The process of perceiving speech begins at the level of the sound within the auditory signal and the process of audition. The initial auditory signal is compared with visual information — primarily lip movement — to extract acoustic cues and phonetic information. It is possible other sensory modalities are integrated at this stage as well. This speech information can then be used for higher-level language processes, such as word recognition.

All content from Kiddle encyclopedia articles (including the article images and facts) can be freely used under Attribution-ShareAlike license, unless stated otherwise. Cite this article:
Perception Facts for Kids. Kiddle Encyclopedia.