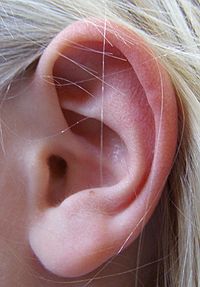 This is a left human ear

Structure of the ear 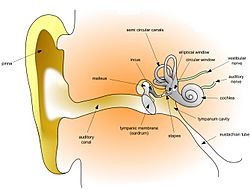 Anatomy of the human ear. (The length of the auditory canal is exaggerated in this image)

The outer ear is the folds of cartilage surrounding the ear canal. They are called the pinna.

Sound waves travelling through the ear canal will hit the tympanum, or eardrum. The malleus (hammer), incus (anvil) and stapes (stirrup). These bones convert the waves to high pressure vibrations. They are then converted to nerve impulses in the cochlea.

The inner ear is made mostly of the cochlea. The cochlea is made up of three pieces, and is filled with liquid. It transforms sound waves to electric signals in neurons. The semicircular canals of the inner ear are used in equilibrioception, the sense of balance.

All content from Kiddle encyclopedia articles (including the article images and facts) can be freely used under Attribution-ShareAlike license, unless stated otherwise. Cite this article:
Auditory system Facts for Kids. Kiddle Encyclopedia.