Kids Encyclopedia Facts
Not to be confused with Cartomancy. 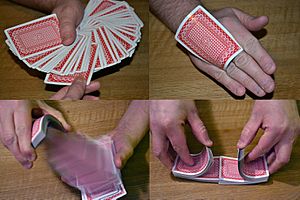 Card manipulation is the branch of magical illusion that deals with creating effects using sleight of hand techniques involving playing cards. Card manipulation is often used in magical performances, especially in close-up, parlor, and street magic. Some of the most recognized names in this field include Dai Vernon, Tony Slydini, Ed Marlo, S.W. Erdnase, Richard Turner, John Scarne and Ricky Jay. Before becoming world-famous for his escapes, Houdini billed himself as "The King of Cards". Among the more well-known card tricks relying on card manipulation are Ambitious Card, and Three-card Monte, a common street hustle also known as Find the Lady.

Lifts are techniques which extract one or more cards from a deck. The produced card(s) are normally known to the audience, for example having previously been selected or identified as part of the illusion. In sleight of hand, a "double lift" can be made to extract two cards from the deck, but held together to appear as one card.

Dealing cards (for example at the start of a traditional card game) is considered a fair means of distributing cards. False deals are techniques which appear to deliver cards fairly, when actually the cards delivered are predetermined or known to the performer. False dealing techniques include: second dealing, bottom dealing, middle dealing, false counts (more or less cards are dealt than expected), and double dealing (the top and bottom cards of a small packet are dealt together).

Now known as the Side Steal. A technique invented by magician F. W. Conradi. It is used to control a predetermined card to the top of a deck.

Palming is a technique for holding or concealing one or more cards in the palm of the hand. Cards palmed from a deck are typically held in reserve (unseen by the audience) until production is required for the illusion being performed. Palming techniques include: the Braue diagonal tip-up, the swing, the thumb-count, face card palm, the crosswise, new vertical, the gamblers' squaring, the gamblers' flat, the Hugard top palm, the flip-over, the Hofzinser bottom, the Braue bottom, the Tenkai palm and the Zingone bottom.

Shuffling cards is considered a fair means to randomize the cards contained in a deck. False shuffles are techniques which appear to fairly shuffle a deck, when actually the cards in the deck are maintained in an order appropriate to the illusion being performed. False shuffles can be performed that permit one or more cards to be positioned in a deck, or even for the entire deck to remain in an unshuffled state (for example the state the deck was in before the shuffle). False shuffle techniques include: the perfect riffle, the strip-out, the Hindu shuffle, the gamblers', and various stock shuffling techniques (where the locations of one or more cards are controlled during the false shuffle).

Cutting a deck of cards is a technique whereby the deck is split into two portions (the split point being randomly determined – often by a member of the audience), which are then swapped – the effect being to make sure that no one is sure of which card is on the top of the deck. False cuts are techniques whereby the performer appears to organise a fair cut, when actually a predetermined card (or cards) is organised to be located on the top of the deck. False cutting techniques include: the false running cut, and the gambler's false cut.

A color change is the effect of changing one card to another in front of the spectators eyes. Usually the cards changed are of different colors, such as a red into a black or a face card into a number card, in order to make the change more visual. There are many different techniques to accomplish this effect, but among the most common are the classic color change and the snap change, due to them being easier to master than others; professional magicians usually deign to perform other color changes while teaching the mentioned color changes to the layperson.

Crimps are techniques whereby part of a card is intentionally physically marked, creased, or bent to facilitate identification during an illusion. Crimp techniques include: the regular crimp, the gamblers' crimp, the breather crimp and the peek crimp.

A jog is one or more cards which protrude slightly from somewhere within a deck or stack of cards. The protrusion, although not noticeable to the audience, permits the performer to retain knowledge about the location of the card during other manipulations. While jogs are not always hidden from the audience, they are most often. Some varieties include 'in jogs', 'side jogs', and 'out jogs'.

Card reverses are techniques whereby one or more cards in a deck are made to change their orientation, for example from face up to face down.

Card forces are the sleight which involves forcing a spectator to choose a card that has been predetermined by the performer, while maintaining supposed free choice. Some forces include; the classic force, the riffle force, and the slip force.

All content from Kiddle encyclopedia articles (including the article images and facts) can be freely used under Attribution-ShareAlike license, unless stated otherwise. Cite this article:
Card manipulation Facts for Kids. Kiddle Encyclopedia.