Sheridan is a city in Sheridan County, Wyoming, United States. The 2010 census put the population at 17,444 and a Micropolitan Statistical Area of 29,116. It is the county seat of Sheridan County.

The city was named after General Philip Sheridan, Union cavalry leader in the American Civil War. Travel book information describe Sheridan at the scene of many fierce battles between US Cavalry and the Sioux, Cheyenne and Crow Indian tribes.

Bus service is available in Sheridan through Arrow/Blackhills Stage Lines. Local service is provided by the Sheridan Mini-Bus and the Sheridan Trolley runs from Memorial Day through Labor Day.

There were 7,680 households of which 26.9% had children under the age of 18 living with them, 42.0% were married couples living together, 9.6% had a female householder with no husband present, 4.3% had a male householder with no wife present, and 44.1% were non-families. 36.9% of all households were made up of individuals and 13.7% had someone living alone who was 65 years of age or older. The average household size was 2.17 and the average family size was 2.86.

There were 7,005 households out of which 26.7% had children under the age of 18 living with them, 45.0% were married couples living together, 9.7% had a female householder with no husband present, and 42.0% were non-families. 35.8% of all households were made up of individuals and 14.8% had someone living alone who was 65 years of age or older. The average household size was 2.21 and the average family size was 2.88.

Several scenes of the 2006 film Flicka were filmed on location in Sheridan. It was based on the novel, My Friend Flicka.

In the film K-PAX, Sheridan is the first stickpin location on a map of cattle slaughter companies. Movies filmed in the area include Wild Horses and Endangered Species.

Sheridan is frequently mentioned in the Colonial Radio serial of the Old West, Powder River.

Sheridan is frequently mentioned in a series of fictional novels by author C. J. Box.

In 1986, MTV hosted the world premiere of Prince's movie Under The Cherry Moon in the city.

Season 6 Episode 12 of Yahoo show Community, refers to Garret and Stacey's Mi Ma or Grandmother as coming from Sheridan.

Sheridan was ranked number one by the True West Magazine in 2006 among the Top Western Towns. It was ranked sixth in 2007. It is a vacation destination as well as a travel stop, due to its proximity to Interstate 90 and U.S. Route 14.

Top Sheridan area destinations include The Brinton Museum in Big Horn, Wyoming, which exhibits iconic 19th, 20th and 21st century Western and American Indian art in the new 25,000 square-foot Forrest E. Mars, Jr. building and in its historic ranch house on the 620-acre Quarter Circle A Ranch. The museum was established in 1961 by Bradford Brinton's sister Helen Brinton, who wanted to make his historic collection of art available to the public. Exhibits include pieces by Charles M. Russell, Frederic Remington, Edward Borein, Winold Reiss, Thomas Moran, and Hans Kleiber, to name just a few. The Brinton Museum draws visitors from all 50 states and more than 30 foreign countries annually.

Another top destination is The Sheridan WYO Rodeo, which began in 1931 and is widely regarded as one of the top rodeos in the nation. It draws 25,000 guests to its annual, weeklong western celebration and performance each July at the Sheridan County Fairgrounds. The Sheridan WYO Rodeo recently launched a new Labor Day Weekend destination event called the Cowboy State Elite Rodeo, the only ERA League of Champions Rodeo event in an outdoor arena in the U.S.

Additionally, in 2009, Sheridan appeared on Newsmax magazine's list of the "Top 25 Most Uniquely American Cities and Towns," a piece written by current CBS News travel editor Peter Greenberg. In the cover story, Greenberg called Sheridan "the real deal" and praised it for preserving "its rich American history."

Ten sites in and near Sheridan are listed on the National Register of Historic Places, including: 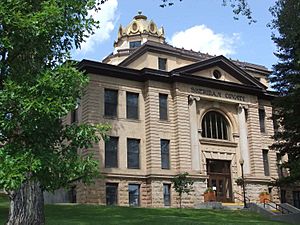 The City of Sheridan maintains nine parks. Kendrick Park, at the corner of Badger and Beaver Streets, includes a children's play area, a seasonal ice cream shop, a swimming pool, chainsaw carvings, and a buffalo and elk conservatory.

Every summer in the second week of July, Sheridan hosts the WYO Rodeo. Rodeo Week events include a parade, the "Sneakers and Spurs" run, a rubber duck race on Big Goose Creek in Kendrick Park, a carnival at the fairgrounds, and a golf tournament at the country club. On the final day of Rodeo Week, a tailgate party and polo game are held in nearby Big Horn, Wyoming.

All content from Kiddle encyclopedia articles (including the article images and facts) can be freely used under Attribution-ShareAlike license, unless stated otherwise. Cite this article:
Sheridan, Wyoming Facts for Kids. Kiddle Encyclopedia.