Monmouth ( is a city in Polk County in the U.S. state of Oregon. It was named for Monmouth, Illinois, the origin of its earliest settlers. The population has reached 9,534 as of the 2010 census and it is part of the Salem Metropolitan Statistical Area.

Monmouth was settled in 1853 by a group of pioneers who allocated 640 acres (2.6 km2) to build both a city and a "college under the auspices of the Christian Church", and proceeds from the sale of these lands were used to found Monmouth University, currently known as Western Oregon University. For decades, Monmouth was a dry town that banned the sale of alcoholic beverages in supermarkets, restaurants and bars. Monmouth's status as the last dry town in Oregon was ended by a popular vote in the November 2002 election.

Monmouth was settled by Elijah Davidson and his family. Originally a member of the Christian Church of Cameron (Monmouth, Illinois), Davidson was a devout advocate of prohibition. In 1852, sixty-three-year-old Elijah Davidson and his family set out for Oregon Territory By 1854, more than a dozen Disciples families from Monmouth, many of them related to each other or to Davidson, had joined him. In February 1859, Davidson and other trustees efforts to prohibit the importation, exportation, sale, and consumption of alcohol in Monmouth became a reality. One of the main arguments Davidson and his fellow religious supporters used to push prohibition legislation was, "to enable them to suppress and prevent nuisances, to render the possession of life and property more secure, [and] to enable them to improve and embellish the streets of the town."

Despite the efforts of certain merchants to repeal prohibition in Monmouth throughout its history, their efforts proved fruitless. What was most important to the local religious community was to keep prohibition for the betterment of the social order of Monmouth. Although opponents raised religious, moral, economic, and quality-of-life arguments similar to those preached during the nineteenth century, they also brought two new arguments to center stage: the historic nature of Monmouth's prohibition and the uniqueness that local prohibition brought to the town.

Eventually support for the prohibition ordinance started to wear thin throughout the community of Monmouth. Although die-hard supporters of prohibition continued to fight the inevitable, there were signs that it was starting to become more and more detrimental to the social and economic aspects of the community. Some claim that prohibition had reduced property values, others that it restricted development of the business sector in town. Opponents of repeal brought forth many arguments for staying dry, including initiating one rumor that the land donated so long ago for the site of the University would revert to the heirs of the donors if the ordinance was repealed, resulting in a huge cost to the state to repurchase it.

After failing by a nearly 5 to 1 margin in the early 1970s, repeal was passed by the voters in November 2002, and Monmouth ended its long tenure as the last dry town on the west coast.

Monmouth is about 15 miles (24 km) west of Salem on Oregon Route 99W. It lies in the Ash Creek watershed, slightly west of the Willamette River.

According to the United States Census Bureau, the city has a total area of 2.24 square miles (5.80 km2), all of it land. 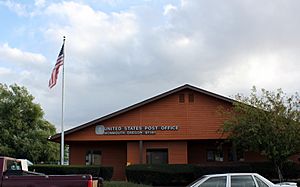 There were 3,247 households of which 26.8% had children under the age of 18 living with them, 41.8% were married couples living together, 9.4% had a female householder with no husband present, 3.3% had a male householder with no wife present, and 45.5% were non-families. 23.9% of all households were made up of individuals and 7.5% had someone living alone who was 65 years of age or older. The average household size was 2.52 and the average family size was 3.07.

There were 2,757 households out of which 26.6% had children under the age of 18 living with them, 41.7% were married couples living together, 9.4% had a female householder with no husband present, and 46.0% were non-families. 24.4% of all households were made up of individuals and 7.5% had someone living alone who was 65 years of age or older. The average household size was 2.50 and the average family size was 3.03.

All content from Kiddle encyclopedia articles (including the article images and facts) can be freely used under Attribution-ShareAlike license, unless stated otherwise. Cite this article:
Monmouth, Oregon Facts for Kids. Kiddle Encyclopedia.