Independence is a city in Polk County, Oregon, United States, on the west bank of the Willamette River along Oregon Route 51, and east of nearby Monmouth. It is part of the Salem Metropolitan Statistical Area. Thirty square blocks of the oldest part of Independence form the National Register of Historic Places-listed Independence Historic District. 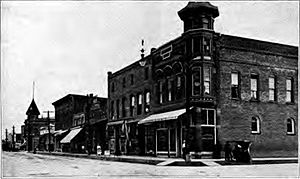 Independence thrived as a shipping point, by both rail and boat, for agricultural products and lumber until the 1950s. The city was known for its hops production from the 1890s through the 1940s, hosting a festival called the "Hops Fiesta" from the early 1930s to the mid-1950s. When hop production began to decline in the early 1950s, the city's fortunes began to decline.

Downtown Independence was bypassed by major freeways in the 1960s, though the period saw an alternative form of transportation enabled by the construction of the Independence State Airport, which was dedicated on August 14, 1964.

There were 2,857 households, of which 42.0% had children under the age of 18 living with them, 51.6% were married couples living together, 12.7% had a female householder with no husband present, 6.5% had a male householder with no wife present, and 29.3% were non-families. 18.6% of all households were made up of individuals, and 5.9% had someone living alone who was 65 years of age or older. The average household size was 2.99 and the average family size was 3.45.

All content from Kiddle encyclopedia articles (including the article images and facts) can be freely used under Attribution-ShareAlike license, unless stated otherwise. Cite this article:
Independence, Oregon Facts for Kids. Kiddle Encyclopedia.