Beaverton is a city in Washington County, in the U.S. state of Oregon that is located 7 miles (11 km) west of Portland in the Tualatin Valley. The city is among the main cities that make up the Portland metropolitan area. Its population was 89,803 at the 2010 census, making it the second-largest city in the county and the sixth-largest city in Oregon. Beaverton is an economic center for Washington County along with neighboring Hillsboro. It is home to the world headquarters of Nike, Inc., although it sits outside of city limits on unincorporated county land.

The hunter–gatherer Atfalati tribe of the Kalapuya people inhabited the Tualatin Valley prior to the arrival of European–American settlers in the 19th century. They occupied a village near the Beaverton and Fanno creeks called Chakeipi, which meant "place of the beaver", and early white settlers referred to this village as Beaverdam. Lawrence Hall took up the first land claim in 1847 and established a grist mill. The entry of a railroad in 1868 spurred growth in the small farming communities and led to the town's incorporation in 1893.

According to Oregon Geographic Names, Beaverton's name is derived from the settlement's proximity to a large body of water resulting from beaver dams.

The area of Tualatin Valley which became Beaverton was originally the home of a Native American tribe known as the Atfalati, which settlers mispronounced as Tualatin. The Atfalati population dwindled in the latter part of the 18th century, and the prosperous tribe was no longer dominant in the area by the 19th century when settlers arrived.

The natives had a village called Chakeipi, meaning Place of the Beaver, and early settlers referred to it as "Beaverdam". Early settlers include the Hall Family from Kentucky, the Denneys who lived on their claim near present-day Scholls Ferry Road and Hall Blvd, and Orin S. Allen, from western New York. Lawrence Hall purchased 640 acres (2.6 km2) in Beaverdam in 1847 and built a grist mill with his brother near present-day Walker Road. His was the first land claim in the area. He was soon followed by Thomas Denney in 1848, who came to the area and built its first sawmill. In 1860, a toll plank road from Portland to Beaverton was completed over a trail called Canyon Road.

Beginning of the town

After the American Civil War, numerous other settlers, including Joshua Welch, George Betts, Charles Angel, W. P. Watson, and John Henry, laid out what is now known as Beaverton hoping they could bring a railroad to an area once described as, "mostly swamps & marshes connected by beaver dams to create what looked like a huge lake." In 1872, Beaverton's first post office opened in a general store operated by Betts, who also served as the first postmaster of the community. Betts Street, where the current post office now stands, is named in honor of him. In 1893, Beaverton, which by that time had a population of 400, was officially incorporated. Alonzo Cady, a local businessman, served as the first mayor. Many major roads in Beaverton are named for these early settlers.

Beaverton was an early home to automobile dealerships. A Ford Motor Company dealership was established there in 1915; it was purchased by Guy Carr in 1923 and over the years Carr expanded it into several locations throughout Beaverton. There are still several dealerships near the intersection of Walker and Canyon Roads.

In the early 1920s, Beaverton was home to Premium Picture Productions, a movie studio which produced about fifteen films. The studio site was later converted into Watt's Field and associated aircraft manufacturing facilities. A second Beaverton airport, Bernard's Airport, was later developed farther north, at the present location of the Cedar Hills Crossing mall.

The town's first library opened in 1925. Originally on the second floor of the Cady building, it has moved repeatedly; in 2000 it was moved to its current location on Hall Boulevard and 5th Street. A branch location was opened for the first time in June, 2010, when the Murray-Scholls location opened near the Murrayhill neighborhood. The Beaverton libraries and 15 other local libraries participate in the Washington County Cooperative Library Services.

In the 1940s, Tualatin Valley Stages, a division of Portland Stages, Inc., provided limited bus transit service connecting the city with downtown Portland, operating later as a separate company, Tualatin Valley Buses, Inc., through the 1960s. This was one of four privately owned bus companies serving the Portland metropolitan area which became collectively known as the "Blue Bus" lines. All four companies were replaced in 1970 by TriMet, a then-new regional transit authority, which expanded bus service to cover more areas of Beaverton.

In the late 1970s, a light rail system was proposed to connect Beaverton to downtown Portland, as part of Metro's plans for the region's transportation. In 1990, voters approved funding for Westside MAX. Construction of the line began in 1993 and was completed in 1998. Six stations are located within the city of Beaverton: Elmonica/SW 170th Avenue, Merlo Road/SW 158th, Beaverton Creek, Millikan Way, Beaverton Central, and the Beaverton Transit Center. All but the last of these (the transit center) are located along right-of-way formerly owned by Burlington Northern Railroad and originally by the Oregon Electric Railway, which provided interurban service through Beaverton until 1933. The present-day light rail service (MAX) is operated by TriMet, which also continues to operate several bus routes serving Beaverton and the surrounding communities. Since early 2009, Beaverton has also been served by commuter rail service, TriMet's Westside Express Service (WES), running south to Wilsonville via Tigard and Tualatin. 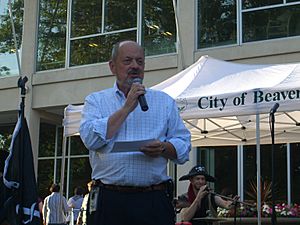 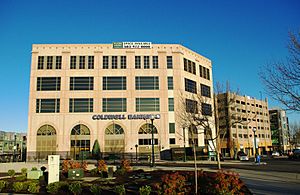 In December 2004, the city and Washington County announced an "interim plan" which would lead to Beaverton becoming the second-largest city in Oregon, second only to Portland. The "interim" plan actually covered a period of more than ten years; from the county's perspective, the plan supported its strategy of having cities and special districts provide urban services. The city of Beaverton also attempted to annex certain businesses, including Nike, which responded with a legal and lobbying effort to resist the annexation. The lobbying effort succeeded quickly, with the Oregon Legislative Assembly enacting Senate Bill 887, which prohibited Beaverton from annexing Nike without the company's consent. The bill also applied to property owned by Electro Scientific Industries, Columbia Sportswear, and Tektronix, and in August 2008 the Oregon Land Use Board of Appeals ruled that the bill also barred the city from annexing property belonging to Leupold & Stevens. (See below, under Economy.) Nike's legal efforts to resist annexation cost Beaverton taxpayers over $360,000 as of July 2006[update].

The city has tried to encourage transit-oriented development around the city's MAX Light Rail stations. The Round, a mixed-use development around Beaverton Central MAX Station on the site of a former sewer plant, was originally announced in 1996. It is only partially complete, due to the bankruptcy of one developer and the Great Recession. In 2014, the City of Beaverton moved its city hall into a vacant office building in The Round. Further development and an arts center have been proposed for the former site of the Westgate Theatre, adjacent to The Round.

According to the United States Census Bureau, the city has a total area of 18.73 square miles (48.51 km2), all land except small creeks, ponds, and lakes.

Reser's Fine Foods, processor and distributor of fresh prepared foods, has headquartered in Beaverton since 1960. Leupold & Stevens, maker of rifle scopes and other specialty optics, has been located on property adjacent to the City of Beaverton since 1968. The Beaverton City Council annexed that property in May 2005, and Leupold & Stevens challenged that annexation. The company eventually won the legal fight in 2009 with the city, thus the company was de-annexed from the city. Beaverton is home to the world headquarters of Nike, Inc. Its headquarters are located on an unincorporated area inside, but excluded from, Beaverton city limits.

According to the City's 2019 Comprehensive Annual Financial Report, the largest employers in the city are:

Cedar Hills Crossing is a shopping mall within the city of Beaverton.

In 2014, the Beaverton–Aloha Little League Intermediate baseball team won the state tournament and traveled to Nogales, Arizona to play in the regional tournament, where they accumulated a 2–2 record.

In 2006, the Murrayhill Little League baseball team qualified for the 2006 Little League World Series, the first Oregon team in 48 years to go that far. Murrayhill advanced to the semi-finals before losing; the third-place game was rained out and not rescheduled. In addition, a Junior Softball team from Beaverton went to 2006 World Series in Kirkland, Washington, ending in sixth place. 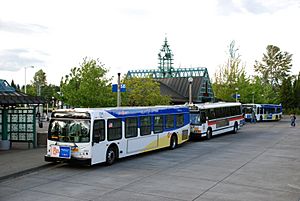 Oregon Electric and Red Electric interurban lines once served the city in the early 20th century. In the 1940s, Tualatin Valley Stages, a division of Portland Stages, Inc., provided limited bus transit service connecting the city with downtown Portland, operating later as a separate company, Tualatin Valley Buses, Inc., through the 1960s. This was one of four privately owned bus companies serving the Portland metropolitan area which became collectively known as the "Blue Bus" lines. All four companies were replaced in 1970 by TriMet, a then-new regional transit authority, which expanded bus service to cover more areas of Beaverton.

The city is the location of a major freeway interchange for U.S. Route 26 (US 26; Sunset Highway) and Oregon Route 217 (OR 217). The Sunset Highway connects Beaverton to Hillsboro and the Oregon Coast to the west and Portland to the east. OR 217 travels from Beaverton south through Tigard and terminates at an interchange with Interstate 5 (I-5).

All content from Kiddle encyclopedia articles (including the article images and facts) can be freely used under Attribution-ShareAlike license, unless stated otherwise. Cite this article:
Beaverton, Oregon Facts for Kids. Kiddle Encyclopedia.