Tigard is a city in Washington County, Oregon, United States. The population was 48,035 at the 2010 census. As of 2007, Tigard was the state's 12th largest city. Incorporated in 1961, the city is located south of Beaverton and north of Tualatin, and is part of the Portland metropolitan area. Interstate 5 and Oregon Route 217 are the main freeways in the city, with Oregon Route 99W and Oregon Route 210 serving as other major highways. Public transit service is provided by TriMet, via several bus routes and the WES Commuter Rail line. 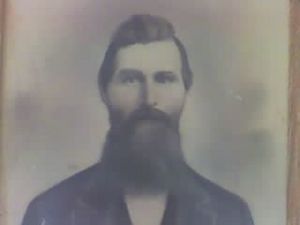 Like many towns in the Willamette Valley, Tigard was originally settled by several families. The most noteworthy was the Tigard family, headed by Wilson M. Tigard. Arriving in the area known as "East Butte" in 1852, the family settled and became involved in organizing and building the East Butte School, a general store (which, starting in 1886, housed the area's post office) and a meeting hall, and renamed East Butte to "Tigardville" in 1886. The Evangelical organization built the Emanuel Evangelical Church at the foot of Bull Mountain, south of the Tigard store in 1886. A blacksmith shop was opened in the 1890s by John Gaarde across from the Tigard Store, and in 1896 a new E. Butte school was opened to handle the growth the community was experiencing from an incoming wave of German settlers.

The period between 1907 and 1910 marked a rapid acceleration in growth as Main Street blossomed with the construction of several new commercial buildings, Germania Hall (a two-story building featuring a restaurant, grocery store, dance hall, and rooms to rent), a shop/post office, and a livery stable. Limited telephone service began in 1908.

In 1910, the arrival of the Oregon Electric Railway triggered the development of Main Street and pushed Tigardville from being merely a small farming community into a period of growth which would lead to its incorporation as a city in 1961. The town was renamed Tigard in 1907 by the railroad to greater distinguish it from the nearby Wilsonville, and the focus of the town reoriented northeast towards the new rail stop as growth accelerated.

1911 marked the introduction of electricity, as the Tualatin Valley Electric company joined Tigard to a service grid with Sherwood and Tualatin. William Ariss built a blacksmith shop on Main Street in 1912 that eventually evolved into a modern service station. In the 1930s the streets and walks of Main Street were finally paved, and another school established to accommodate growth.

The city was the respondent in (and eventual loser of) the landmark property rights case, Dolan v. City of Tigard, decided by the Supreme Court of the United States in 1994. The case established the "rough proportionality" test that is now applied throughout the United States when a local government evaluates a land use application and determines the exactions to require of the recipient of a land use approval.

In the 2004 general elections, the city of Tigard won approval from its voters to annex the unincorporated suburbs on Bull Mountain, a hill to the west of Tigard. However, residents in that area have rejected annexation and are currently fighting in court various moves by the city.

North of McDonald Street, Tigard, along with Metzger and some of the unincorporated Bull Mountain area, uses the 97223 ZIP code for incoming mail, while the southern half of the city uses 97224, as do the nearby city of King City and the community of Durham. All mail for both ZIP codes is processed in Portland. The Tigard Post Office on Main Street has a ZIP code of 97281, which is used only for post office boxes. Local phone numbers may be within the 503 or 971 area codes.

There were 19,157 households of which 33.3% had children under the age of 18 living with them, 50.4% were married couples living together, 10.0% had a female householder with no husband present, 4.6% had a male householder with no wife present, and 34.9% were non-families. 26.9% of all households were made up of individuals and 8.7% had someone living alone who was 65 years of age or older. The average household size was 2.49 and the average family size was 3.04.

Tigard is officially divided into 13 geographic areas around elementary schools and major transportation routes. Each neighborhood has been assigned an area number, 1-13, however some of the neighborhoods carry unofficial names long associated with them prior to their current numeric designations. For instance: Area 1 does not have a particular name associated with it. Area 2 is often called Summerlake after Summerlake Park. Area 3 includes the historic Greenburg neighborhood. Area 4 is called either North Tigard or, more commonly, Metzger (though much of Metzger lies in unincorporated Washington County). Area 5 is commonly referred to as the "Tigard Triangle," with Oregon Highways 99W and 217 forming two sides of the triangle and Interstate 5 forming the other side.

Area 6 contains Downtown Tigard and City Hall. This neighborhood will also be the focus for a long range plan to improve and redesign the center of the city. Area 7 is sometimes called Bonita after Bonita Road and Bonita Park. Area 8 is called Southview and rests upon a broad hill named Little Bull Mountain across Oregon Highway 99W from the taller Bull Mountain. Area 9 is the Cook Park Neighborhood, named after the city's largest park. It also contains Tigard High School. Area 10 is Central Tigard. It is the site of the old downtown where there is now a strip mall along Highway 99W. Area 11 does not have a particular name associated with it. Area 12 is the incorporated part of East Bull Mountain. Area 13 lies on the northwest slope of Bull Mountain and is called West Tigard. 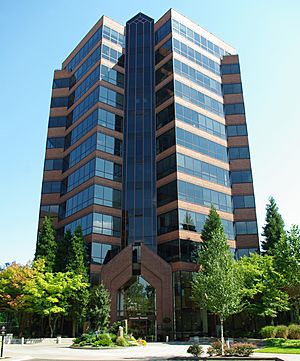 The John Tigard House, constructed by the son of Wilson M. Tigard in 1880 at the corner of SW Pacific Hwy and SW Gaarde St, remains, having been saved from demolition in the 1970s by the Tigard Area Historical and Preservation Association. It became registered as a National Historic Place in 1979, and now stands at the corner of SW Canterbury Lane and SW 103rd.

During the Portland Rose Festival every summer, the Tigard Festival of Balloons is held at Cook Park near Tigard High School. The tallest building in both the city and county is a 12-story building at Lincoln Center.

Interstate 5 passes along the eastern edge of the city, with Oregon Route 217's southern terminus at I-5 at Tigard. Other major roads are Oregon Route 99W, Boones Ferry Road, and Hall Boulevard (Boones Ferry and Hall, along with a small portion of Durham Road, are the components of Oregon Route 141). Oregon Route 210 is located along the northern boundary, separating Tigard from Beaverton. Public transportation is provided by TriMet, with service via buses and the Westside Express Service (WES), a commuter rail line connecting to Wilsonville and Beaverton. WES has a stop at Tigard Transit Center, with Washington Square Transit Center as the only other TriMet transit center in the city.

All content from Kiddle encyclopedia articles (including the article images and facts) can be freely used under Attribution-ShareAlike license, unless stated otherwise. Cite this article:
Tigard, Oregon Facts for Kids. Kiddle Encyclopedia.