Cooper Mountain Nature Park is a 231 acres (93 ha) nature park in the Portland metropolitan area in the U.S. state of Oregon. Opened in 2009, the park is owned and operated by Metro, the regional government in the Oregon portion of the metro area. The park is named after Cooper Mountain, the primary geological feature in the area near Beaverton. Maintained by the regional Tualatin Hills Park and Recreation District, the natural area has 3.5 miles (5.6 km) of hiking trails. It is one of THPRD's two nature parks, along with the Tualatin Hills Nature Park.

Portland area voters approved a bond measure in 1995 that provided funding for the purchase of greenspaces by Metro. Metro covers most of Washington, Clackamas, and Multnomah counties in the northwest part of Oregon. Metro began buying land on Cooper Mountain near Aloha and Beaverton in 1997, and spent $6.58 million in total on land. Voters approved an additional bond in 2006, and Metro spent almost $2 million from that bond on facilities at Cooper Mountain. Metro also received a $500,000 grant from the Oregon Department of Parks and Recreation and a $40,000 grant from the National Fish and Wildlife Foundation for development of the park. To prepare the area for the park and help restore the native habitat, the area was burned in 2008. Cooper Mountain Nature Park opened on June 27, 2009. Through 2009, volunteers and Metro planted approximately 100,000 shrubs and trees at the park.

Cooper Mountain Nature Park is located on the south side of the 774-foot (236 m) tall Cooper Mountain in eastern Washington County. The mountain, contrary to popular belief, is not a former volcano, but was formed due to basalt flows in the Tualatin Valley. The park's natural areas include groves of oak trees, wetlands, prairie, ponds, and forested areas. Metro owns the park, but will pay Tualatin Hills Parks and Recreation about $600,000 to maintain the park over a ten-year contract. The 231 acres (93 ha) natural area is surrounded by agricultural lands to the south and urban development on the north. Cooper Mountain is between Oregon Route 10 and Oregon Route 210 south of Beaverton. 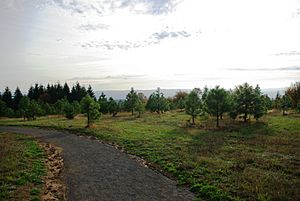 Trail and young trees at the park looking south

All content from Kiddle encyclopedia articles (including the article images and facts) can be freely used under Attribution-ShareAlike license, unless stated otherwise. Cite this article:
Cooper Mountain Nature Park Facts for Kids. Kiddle Encyclopedia.