Aquilegia formosa, the crimson columbine, western columbine, or (ambiguously) "red columbine", is a common wildflower native to western North America, from Alaska to Baja California, and eastward to Montana and Wyoming.

The Aquilegia formosa plant grows to 20–80 cm in height, averaging around 60 cm. Flowers, which can be seen from April to August (with some variation between regions), are about 5 cm long and red and yellow in color. Technically, the red or orange spreading outer parts of the flower are sepals, and the yellow inner parts are the true petal. The petals bear spurs that attract the plant's pollinators, the sphinx moths. Hummingbirds are also attracted to it in gardens.

The flowers are edible, with a sweet taste—though the seeds can be fatal if eaten, and most parts of the plant contain cyanogenic glycosides.

Within its range, the crimson columbine can be found in most kinds of habitat (chaparral, oak woodland, mixed-evergreen or coniferous forest). It is not found on desert floors, nor at altitudes above 3300 metres, and it is absent from the Central Valley of California. It prefers moist locations such as stream banks. 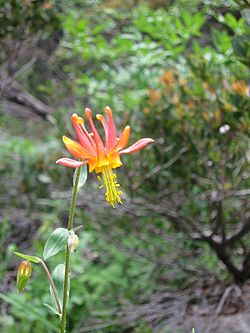 Some Plateau Indian tribes used the Aquilegia formosa to concoct a perfume. It is also used medicinally by several Native American tribes.

Aquilegia is derived from the Latin word 'aquila', meaning 'eagle', or possibly from the Medieval German words 'Acheleia' or 'Akelei'; this name is in reference to its talon-like nectaries. Formosa means 'handsome', 'beautiful', or 'well-formed'.

All content from Kiddle encyclopedia articles (including the article images and facts) can be freely used under Attribution-ShareAlike license, unless stated otherwise. Cite this article:
Crimson columbine Facts for Kids. Kiddle Encyclopedia.